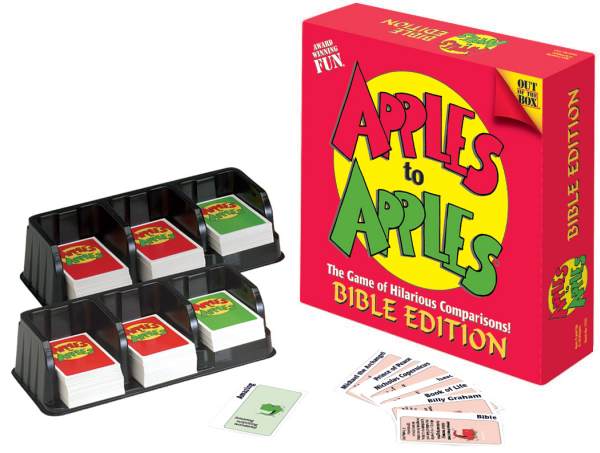 Now this popular party game is available in a Bible edition perfect for families, youth groups, and church activities! If you're not familiar with the regular edition, Apples to Apples is a hilarious card game for 4-10 players. The game consists of red apple cards and green apple cards. The green apple cards each feature an adjective such as "harmful," "friendly," etc., and if you're not sure exactly what the word means, each card contains a helpful list of synonyms at the bottom. Red apple cards contain nouns people, places, things, or events. In the Bible edition, the red apple cards all contain nouns from the Bible or Christian history, and a Bible verse is featured on the bottom of each card. In the first round, one player is elected the "judge," and he or she deals out seven cards to each player including him/herself. He or she then flips over a green adjective card. Each player (except the judge) plays a red noun card face down that they feel best fits that adjective. The judge shuffles the cards (so they won't know who played which card), reads through them, decides which card is the best fit (or the funniest, depending on the judge!), and awards the green apple card to that player. Then the player on the left of the judge becomes the next judge, who replenishes everyone's hand to seven cards, and the second round begins. The first player to gather four green apple cards wins! The game contains 432 red apple cards, 144 green apple cards, card trays, and instructions which include instructions for three game variations. This one is sure to be an instant hit with your family and friends! ~ Megan 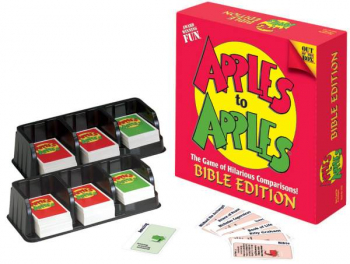