It has been a long time since any new math manipulative has crossed my path. Most are based on rods or sticks; from Cuisenaire rods to Multilinks. I have a cabinet full of well-used articles to demonstrate math concepts concretely. So it would be difficult for a new and different manipulative to impress me. Well, it happened. I met Dr. Des Rainey at the NSSEA convention this yearbarely made it to the booth as I was (in typical fashion) running late. He had traveled all the way from New Zealand with his invention, the Number Stick, primarily in use in the NZ school system, where it is referred to as the "Kiwi Number Stick" and used with Dr. Rainey's activity books. These books use a systematic approach to help children develop a number-family knowledge base, basically by discovery through manipulation, game play and practice activities all using Number Sticks.

The Number Stick is a very different modeling tool and one that works for almost any and every mathematical concept you want to demonstrate. It is primarily used in the activity books to represent the quantity of a number and as a random number-family fact generator. It incorporates the benefits of an abacus with the versatility of multilink cubes. Basically, it is a stick with clip-on swinging balls. Each number stick has room for clipping ten such appendages and comes with five of each color attached. For very early use, you will attach the number of balls corresponding to the number or number family you want to teach. Children practice families by shaking the stick and rapidly placing it on a surface to randomly flay the balls on either side of the stick, creating different fact-families. For example, to teach the number families for six, you would attach six balls to the stick. As the child plays with the stick, he can discover the families 0 + 6, 1 + 5, 2 + 4, 3 + 3, etc. It is also very easy for the child to "see" the commutative property demonstrated here, as the total number will not change whether there are 4 balls on the left and 2 on the right or vice versa. You can also model the different families using the two different colors. But, there's more! What an ideal way to visually teach subtraction! Start out with all of the balls on one side, then "take away" balls (swing over to the other side), and see what you have left. Plus a child can readily see that this is part of the same fact family, looking quite a bit like the associated addition fact. For multiplication, attach balls in groups. In case you are wondering yes! The sticks themselves attach end to end, also. They conveniently plug into one another so you can carry those multiplication facts as far as you'd like. Division? Just start out with the full number, then "divide" into groups by alternating them from one side to the other. Let's say you want to show a child how many 3's are in 15. Put 15 balls on the number sticks (attached), then start "grouping" into threes; three on the right, three on the left, etc. It is very easy to see how many groups you have made. Andit just gets better with remainders! What do you do with that last 2 if you had attached 17 balls? While Dr. Rainey's activity books end here, you don't have to. Take these sticks on into demonstrating positive and negative numbers (I love the way this works!). Put your number stick horizontally in front of you. Positive numbers go "up" above the stick, negative numbers below the "line". At the end, it's easy to see which is more. Or use your two different colors, one for positives one for negatives. Then let corresponding pluses and minuses cancel each other by moving to the other side. Your net is the number of balls remaining on the starting side and positive or negative depending on the color. Why, I would have loved to have these to teach alternate base systems! By fastening, say, four groups of three along two number sticks (with gaps between), I can model a base-three system. You can either write on each ball with dry-erase marker or place on a paper, marking what each group's value is (units, threes, nines, twenty-sevens). Of course, it is ideal for working in base ten, with each number stick representing a place. It's easy to both construct numbers and to see the need for regrouping, since only ten ball-clips are possible in each "column". And did I mention yet how useful these are for pre-algebraic concepts? When fastened together, the number sticks even resemble the arms of a balance. Put balls of one color on one side, then fewer on the other. How do we make them balance? How many more balls do we need to attach to the left side to have the same number on each side? By using both colors, you can even have two unknowns. Oh, and I would have loved this to concretely demonstrate permutations. Especially with the addition of another couple of number sticks with two other colors. How many different ways can I order the four colors into four slots on the number stick? Okay, so I think this is a pretty cool "new" and versatile manipulative. And, while I admit that it won't replace your geometric solids for geometry class, your cabinet will have a lot less clutter! Your kinesthetic children are gonna love working with these! They actually move and swing and you can slap them on a surface to do math!

Each number stick comes with ten ball-clips in two colors. At present, these are: purple/silver, orange/pink, red/green, blue/yellow, though combinations can change without notice. I would strongly suggest ordering at least two. While we cannot accommodate your choice in color (ours arrive in mixed batches), we WILL make sure you get two of the same color combination. If ordering more than two, every set of two will be in a different color combination unless you specify that you want them the same.

Activity books below practice early math concepts. They focus on imparting a strong sense of a number and the parts (addends, factors, etc.) that "make up" the number. While I believe a child would also have his facts memorized after working through them, you can follow up with a drill program if needed. 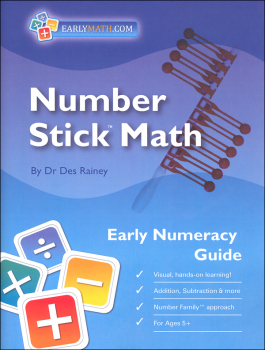 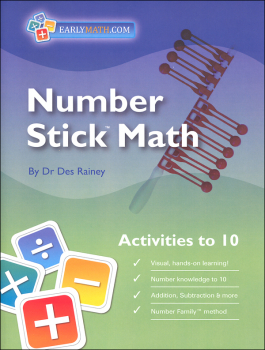 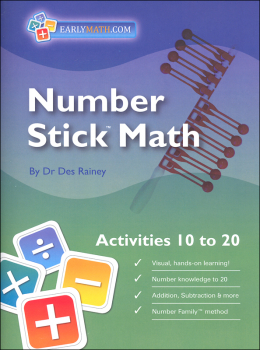