Hold a revolution in your living room! It's 1775 and events are escalating. Players cooperate to control major factions and use a 4-stage play sequence to strategize campaigns and attempt to control the colonies. The game ends when a truce is called and those with the most colonies wins. Three different play scenarios are available: introductory (shorter playing time), the 1773 Campaign, or the Siege of Quebec. The fight for American control was nuanced and involved - more than just British Redcoats and American Patriots. Players must also involve the English loyalists, German Hessians, American and French Regulars and Native Americans. 1775 melds together in-depth strategy, role-playing, cooperative play, history education and additional companion products to enhance play. Game components are well made, durable and include a large (approx. 38"x19") map-covered game board showing the original 13 colonies, Quebec and Nova Scotia. Game pieces include 54 strategy cards (15 British Regulars, 13 Loyalist Militia, 14 Continental Army, and 12 Patriot Militia), 205 wooden unit cubes representing armies, 16 battle dice, 16 double-sided control pieces, 4 turn markers, an in-depth rulebook with historical scenarios, planning maps, and a storage bag. Winner of multiple awards. 2-4 players; 1-2 hours; ages 10-AD.

An optional Teacher's Manual provides lessons that encompass the start of the revolution, the causes for the colonies' dissolution, the war years and ramifications of independence. Additional gaming scenarios as well as options to meet individual goals for England, the Colonies, France and other European nations are outlined. Correlations are included for middle, high school and AP credit history courses. 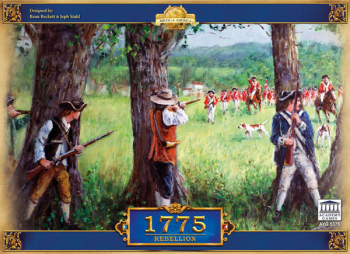