Memorization can have a profound effect on all areas of learning. The discipline required to memorize new pieces and maintain old ones helps children learn and retain material regardless of the subject. Also, the more a child memorizes, the easier it becomes. While memorization used to be a mainstay in education, this powerful tool is now largely overlooked. This program helps you utilize the power of memorization in your school. It includes five different levels of poetry selections to be memorized: four levels of poems and one of famous speeches. Poetry is used as the primary memorization tool because it is generally enjoyable, easily remembered, and displays sophisticated vocabulary and structure. The poems in this book were carefully selected for their linguistic qualities, as well as other criteria. While you can start this program with a student of any age, it is recommended that you start as early as possible. Even if your child is too young to read, he can begin memorizing as you read poems to him one line at a time. All students begin at Level One. There are five levels in all, and while it will probably take you multiple years to complete the program, you will begin to see results within just a couple of months. There are over 100 poems and speeches to memorize throughout the program. The length of the poems varies, with more short ones near the beginning and more long ones near the end. However, there are some lengthier poems in the first level as well as some short ones at the end. Shorter poems give students a break, so once they reach the end levels they aren't overwhelmed. Students progress through the levels, memorizing new ones and constantly practicing old ones. You are likely to recognize many of the included poems, such as "Who Has Seen the Wind?" "The Eagle," "Jabberwocky," "Stopping By Woods on a Snowy Evening," "Casey at the Bat," and "In Flanders Fields." When students learn the first poem, they move on to the second, but they still recite the first poem at least once a day. When they finish the second, they move on to third, again reciting the first two poems at least once a day. For the entire first chapter, students recite every poem they've learned every day until they have memorized all twenty. When they move into the second level, they recite the previously learned poems "E.O.P.E.O.D." - every other poem, every other day. At the third level, their recitation of past poems is again adjusted on a rotating schedule to make sure they are flawlessly maintained. By the end of Level Four, students will most likely have achieved a life-long retention of all eighty poems due to the frequency, intensity, and duration and will be ready to tackle the speeches in Level Five. While memorizing over a hundred speeches and poems may seem like a huge undertaking, remember that it will get easier as they go and is supposed to take several years. The benefits students will reap from exercising and growing their brain through memorization will spill over into all areas of education. Also, poems and speeches can be recited in the car, through chores, or while working on other projects to cut down on the required "school" time. Brief biographies of the included poets are provided.

The complete boxed set includes the spiral-bound teacher's manual (which includes directions to download the student e-book), Nurturing Competent Communicators DVD, five CDs and a soft disc case. The CDs have been newly recorded and feature all of the poems and speeches from all five levels so students can hear the poems read with correct pronunciation, clear articulation, and artistic locution. These can also aid younger learners so you don't need to read and repeat the poems for them. However, you can opt to purchase the teacher's manual individually (plus directions to download student e-book), if you are just looking for the core of the program and don't mind reading the poems and speeches to your child. - Melissa 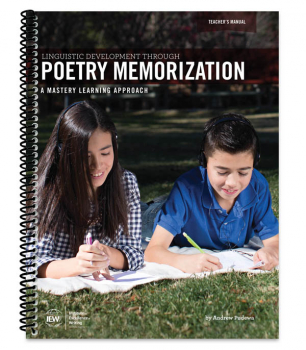 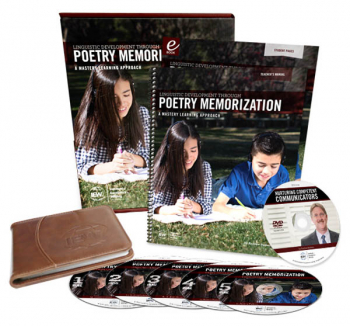 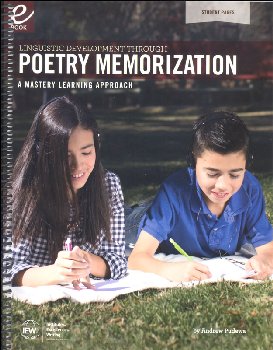