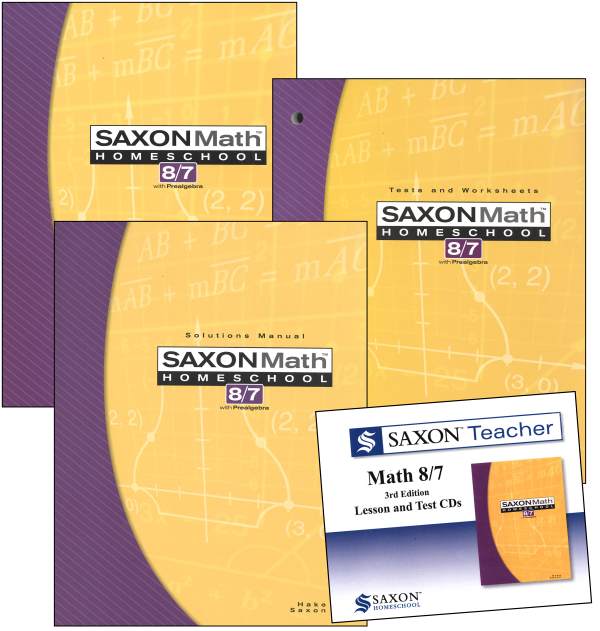 Please check system requirements for CD-ROM set prior to purchase to ensure that it will work with your operating system: Windows XP, Vista, Windows 7, Windows 8; Mac OS 10.2 -10.4. PLEASE note that CD-ROM format also uses Adobe Flash Player, which will be unsupported at the end of 2020.

Saxon Teacher with Home Study Kit packages include the text, tests, answer key and Saxon Teacher for that level. Please note that although some of the newer Saxon Teacher disc sets are called DVDs, they are designed to work exclusively on a computer, not a standard DVD player. System requirements: Windows XP, Vista, Windows 7, Windows 8; Mac OS 10.2 -10.4. PLEASE note that CD-ROM format also uses Adobe Flash Player, which will be unsupported at the end of 2020.

Category Description for COMPREHENSIVE PROGRAMS - ALL GRADES:
Primary Subject
Mathematics
Grade Start
7
Grade End
8
Format
Product Bundle
Brand Name
Saxon Publishers
Weight
0.0 (lbs.)
Powered by TurnTo
Questions that need answers | My Posts
Start typing your question and we'll check if it was already asked and answered. Learn More
Do not include HTML, links, references to other stores, pricing or contact info.
My question is about:

Powered by TurnTo
Review More Purchases | My Posts
5.0 / 5.0
5 Reviews
5 Stars
4 Stars
3 Stars
2 Stars
1 Star
5
0
0
0
0
Love the spiral approach. Saxon Math helped me move my daughter along In math. Overall a solid math foundation can be found using Saxon Math. Carefully crafted lessons and assessments no need to plan lessons. Though my daughter found the cd to be too slow she has found great success with Saxon Math, she practically teaches herself.
July 30, 2020
Karel H
Purchased
8 months ago
Surprisingly Delighted
I purchased Saxon 8/7 HS Kit with Teacher CD-ROMs when my daughter began struggling with pre-algebra concepts and was unable to continue with 7th grade Horizons math by Alpha Omega. Horizons is spiral, but concepts are not continuously practiced through the year, so some concepts can be forgotten. Horizons is a bit more advanced and faster-paced, but does not have sufficient teacher instruction with examples, or enough student practice with the pre-algebra course. However, Saxon, with the Teacher CDs has proven to be just what my daughter needed to fully grasp important terms and concepts (with sufficient Saxon examples & practice problems with solutions). I'm surprised to see her delve into her Saxon math assignments with confidence and interest! Fully recommend!
October 6, 2016
Rena H
Purchased
over 4 years ago
A solid program
After using a popular computer based math program, we've chosen to switch back to Saxon. My oldest child used the computer based math until her junior year. We quickly realized that she was not adequately prepared for the math portion of the sat. So we switched her to Saxon advanced math. This rigerous program greatly helped prepare her for the sat. The problems In Saxon are set up in a similar format to the sat. Saxon is a solid math program--which does require parental involvement. It's not fancy, but it's the only program we'll use.
September 23, 2016
Connie B
Purchased
over 4 years ago
Saxon
My son is enjoying being able to read the instructions and go at his own pace. He is a math wiz; so he moving right along!
August 26, 2016
Candice W
Purchased
over 4 years ago
Without the excellent live chat I wouldn't have made the right choice for my son He was so excited when I told him how fast the math books would come He literally waited for the shipment to come and it arrived exactly when you said it would Thank you for bringing joy and fulfillment to our family by offering this product at a reasonable price We are truly grateful to the Lord for you Be blessedThe Hall Family
September 6, 2011
Vanessa Hall 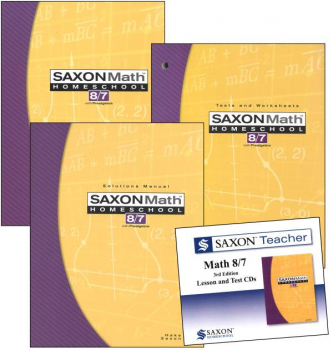