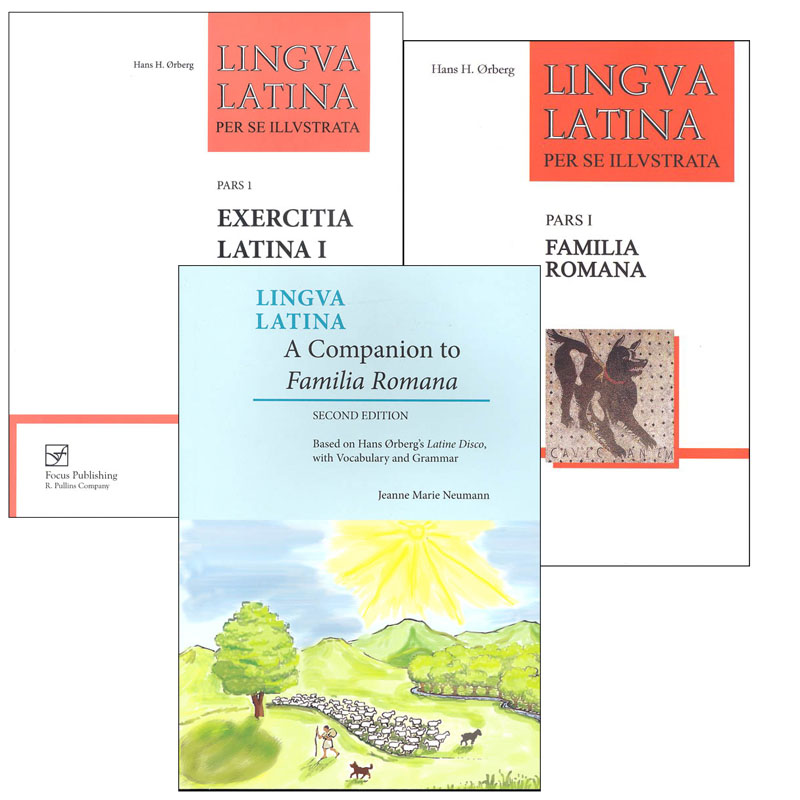 The first portion of the course consists of a reader, Familia Romana, a student manual, Latin exercises, a Latin grammar booklet, and a list of Latin-English vocabulary used in the reader. The reader is written entirely in Latin, follows the daily life of a Roman family set in the 2nd century A.D., as told through 35 chapters and a 1500-word basic Latin vocabulary. The last portion of the book features readings from classical poets and Donatus' Ars Grammatica, a popular Latin school text. Each chapter consists of two to three readings, followed by short sections on grammar highlighting grammatical points that have been used in the reading text, as well as grammar and vocabulary exercises to further solidify the student's grasp of words and usage. The new words introduced in the reader are used in context, are explained through the illustrations, and are often noted in the margin. Altogether, it is designed so that the student should be able to read and advance through the book without stopping frequently to look up words. The chapters advance gradually in complexity so that the student gains new vocabulary through the context of words he or she has already become comfortable with. Now in its 2nd edition, the reader features full-color pictures and maps. The Latine Disco, or student's manual, functions as the student's guide to pronunciation, and offers instructions and information on key points featured in each chapter of the reader. The Grammatica Latina manual contains paradigms and forms of Latin grammar, as used in the reader. Exercitia Latina provides exercises to practice grammar, usage, and vocabulary that correlate with each lesson in Familia Romana. The Lingua Latina: Glossarium replaced the Latin-English Vocabulary for Part 1 and contains glossaries for Familia Romana, Colloquia Personarum, Fabulae Syrae, and Fabellae Latinae. A Companion to Familia Romana is also available, which you would use in place of Latine Disco, Grammatica Latina and the Latin-English Vocabulary. It provides a running grammatical commentary on Familia Romana. Chapters of the Companion correlate directly to chapters in Familia Romana, with Grammatica Latina and the Latin-English Vocabulary appended in the back of the book. Because this book goes into much more detail than the Latine Disco, it is also recommended as a good companion for teachers who have little knowledge of Latin. Compared to Latine Disco (50 pages), the College Companion is much heftier with 405 pages. For those who would prefer the Companion, we are offering it individually and in a package, replacing the other three booklets. While use of all components would certainly be best for a well-rounded and complete study, the publishers add that the use of Familia Romana and the student's manual will get the student off to a good start as well.

Several types of instructional aids are available. Teacher Materials includes chapter-by-chapter exercises for Familia Romana and Roma Aeterna, answer keys to these exercises, and answer keys to Exercita Latina I and II. The Teacher's Manual-like Latine Doceo does not contain answer keys, but does include plenty of information and advice for the teacher, tips on lesson planning, and helpful appendices.

Through immersing the student into Latin through the readings and exercises, it is expected that they will be get up and running with a basic understanding of the Latin language, grammar, and acquire a basic Latin vocabulary in a focused and fairly easy way. The stories in the readers are written with humor and charm, and readers should find the content fairly interesting. I have to admit, when I first begin looking through the program, I was not too excited to be writing about it, but when I really starting examining it, it began to look organized, well-written, and not even as intimidating as other Latin programs I've been familiar with. Fairly inexpensive and user-friendly, I'd give this one a try for your upper level students. - Jess

Primary Subject
Foreign Language
Grade Start
8
Grade End
AD
Format
Product Bundle
Brand Name
Focus Publishing
Weight
0.0 (lbs.)
Powered by TurnTo
Questions that need answers | My Posts
Start typing your question and we'll check if it was already asked and answered. Learn More
Do not include HTML, links, references to other stores, pricing or contact info.
My question is about: 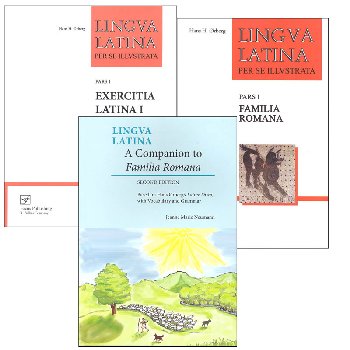