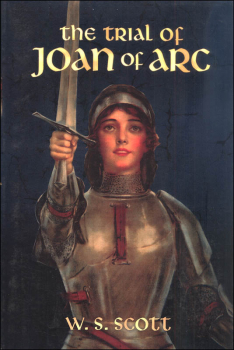 Trial of Joan of Arc

Joan of Arc is a fascinating historical figure whose life and untimely death often seems to belong more to legend than history. The Trial of Joan of Arc is a unique book that is sure to fascinate anyone interested in the Middle Ages, or in Joan of Arc herself. The introduction details the unjust nature of her trial and explains how the official documentation of the trial was distorted for political reasons and passed down through history in that form. The Orleans manuscript was long viewed as irrelevant, but was later found to be a reproduction of the original transcription of the trial proceedings, making it the most accurate and complete record of the trial. This book is a translation of that manuscript, offering readers the opportunity to rediscover the full proceedings of the trial of Joan of Arc, with her answers in her own words. It also includes an account of her life leading up to the trial, with medievalesque black-and-white illustrations. 174 pgs, pb. ~ Rachel E.

In her journey from peasant to military commander to martyr, Joan of Arc cuts an extraordinary figure, even for a saint. Inspired by religious visions to lead a victorious campaign against invading English forces, the iconic figure is credited with changing the direction of the Hundred Years' War and establishing a sense of French nationalism. Her tragically brief life ended in betrayal by her countrymen andexecution by the English, but her legend endures, captivating imaginations around the world and inspiring art and literature as well as a cult-like devotion.
This volume presents the most complete and accurate account of the 1431 Inquisition-style trial that culminated in Joan's death. Conducted in Rouen by two judges, a prosecutor, and some sixty assessors, the proceedings were taken down verbatim by a notary and his two assistants. The French heroine's life, character, visions, and motives spring to vivid life as she answers her accusers in her own words. A brief history of Joan's mission, military victories, and capture complements this remarkable historical resource, which is further enhanced by period woodcuts.