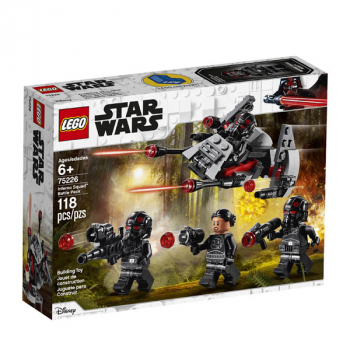 Go on patrol with Iden Versio and the Inferno Squad Agents! Sit her on the armored TIE fighter style speeder and arm the stud shooters. Then set out on exciting battles against the Rebels!

" Includes 4 LEGO® Star Wars minifigures: Iden Versio and 3 Inferno Squad Agents." Features a TIE fighter inspired speeder with 2 stud shooters and space for a minifigure." Weapons include 2 stud blasters, a stud blaster rifle and a stud rocket launcher." Play out exciting scenes as you help the Imperial troopers track down the Rebels." All characters in this set are new for January 2019." Speeder building toy measures over 1" (4cm) high, 4" (11cm) long and 3" (9cm) wide.

Primary Subject
Games, Puzzles & Toys
Grade Start
1
Grade End
9
EAN
673419303644
Format
Other
Brand Name
LEGO
Weight
0.25 (lbs.)
Dimensions
5.5" x 7.5" x 1.75"
Powered by TurnTo
Questions that need answers | My Posts
Start typing your question and we'll check if it was already asked and answered. Learn More
Do not include HTML, links, references to other stores, pricing or contact info.
My question is about: