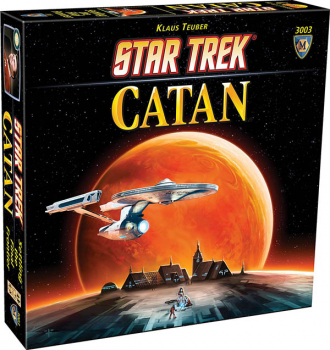 Star Trek: Catan transports the timeless game play of The Settlers of Catan to the final frontier of the Star Trek universe. Designed by legendary Catan creator Klaus Teuber, this game features a randomized game board so the game is different each time you play.

Star Trek: Catan brings the beloved characters of the original Star Trek series to life through a series of support cards. Enlist the aid of ten classic Star Trek characters including Kirk, Spock, McCoy, Scotty, and Uhura as you settle and develop worlds necessary for the expansion and survival of the Federation.

One might not think Catan would lend itself well to the Star Trek universe, but this recreation of the classic does so perfectly! All the core gameplay of Catan remains, wrapped in the beautifully thematic sci-fi universe fans have come to know and love. Players collect dilithium, tritanium, food, oxygen and water by building Starships (roads) and setting up Outposts (settlements) on the corner of resource tiles. Upgrading Outposts to Starbases provides additional resources - you get the gist. Spicing up the usual fare are Helper Cards styled after the original Star Trek cast. These provide players one-time benefits to use at their discretion: trading at a 2:1 ratio without a port, keeping excess cards when a 7 is rolled, etc. Star Trek fans may try to forgo this clever rendition, but as we all know, resistance is futile! For 3-4 players. ~75-minute playtime.