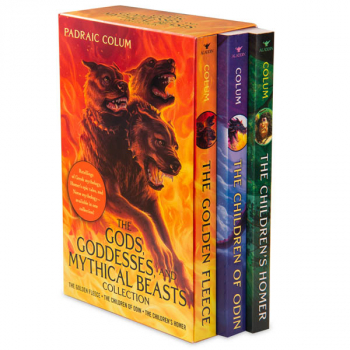 This series by Padric Colum retells the worlds of Homer’s tales, Norse mythology, and Greek mythology into a combined box set of readings that can be clearly read and understood at upper-elementary levels. Included in this bundle are the following books: The Children’s Homer, The Children of Odin, and The Golden Fleece. The Children’s Homer (027700) and Children of Oden (013768) can also be purchased individually on our website.

The Golden Fleece takes readers into classic Greek mythology with Jason and the Argonauts and their fascinating epic about life, war, and the astounding beings who lived in a time long past. Join Odysseus on his famous journey in The Children's Homer. Using narrative threads from The Iliad and The Odyssey, Padraic Colum weaves a stunning adventure with all the drama and power that Homer intended. The Children of Odin takes readers to the city of Asgard, a place defended by Thor, where gods, dragons, and giants walk free in this collection of thrillingly told Norse sagas.

Primary Subject
Library Builders
Grade Start
5
Grade End
9
ISBN
9781481488518
Format
Other
Brand Name
Aladdin Paperbacks
Weight
1.75 (lbs.)
Dimensions
8.25" x 5.5" x 2.38"
Powered by TurnTo
Questions that need answers | My Posts
Start typing your question and we'll check if it was already asked and answered. Learn More
Do not include HTML, links, references to other stores, pricing or contact info.
My question is about: