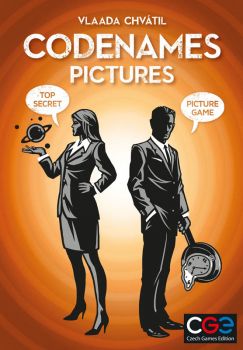 Codenames can now be played with pictures! Whimsical, mind-twisting illustrations are used instead of word cards. Can you find one word that ties your team's pictures together?

Can be played with or instead of the original Codenames. The rules of the game are the same: Two rival spymasters give one-word clues that can point to multiple pictures on the table. Their teammates try to guess pictures of their color while avoiding those that belong to the opposing team.

This competitive game pits two teams against each other in a race to uncover their secret spies. Each team votes one player to be the “spymaster.” Twenty-five code name cards, each with one word, are laid out. Each word belongs to one of the teams, or is an innocent bystander; one card is the assassin. The two spymasters are the only ones who know which is which. The trick is for the spymasters to think of a one-word clue which relates to as many of their words as possible. The rest of your team works together to decide which card or cards you are trying to have them guess. Whichever team finds all of their secret agents first wins. 200 double-sided code name cards and 40 different key cards mean this game can be played over and over again. Younger players can participate even if they aren’t ideal “spymasters”, and it works with varying group sizes (4-8+). It’s no surprise this one was voted the #1 Party Game on BoardGameGeek.com.