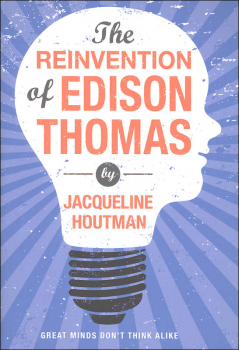 A stimulating novel about a young boy in middle school who has trouble fitting in with the crowd, chiefly because he thinks and learns differently than most students. While this young person struggles to overcome labels and the misconceptions of students who prefer bullying to compassion, readers eventually learn that not everyone with value is destined to be popular. Readers also learn that even young people, who are ridiculed for thinking or acting differently, still need someone to reach out to them with the gift of friendship. This novel helps to communicate the fact that children with learning difficulties are still human beings in need of love and acceptance. This novel presents such a vital message that it should be required reading in all schools. 196 pgs, pb. ~ Mike

Eddy's a science geek and has problems communicating with others. The combination gives the class bully, who pretends to be Eddy's friend, plenty of ammunition. Eddy Thomas can read a college physics book, but he can't read the emotions on the faces of his classmates. He can spend hours tinkering with an invention, but he can't stand more than a few minutes in a noisy crowd, like the crowd at the science fair, which Eddy fails to win. When the local school crossing guard is laid off, Eddy is haunted by thoughts of the potentially disastrous consequences and invents a traffic-calming device, using parts he has scavenged from discarded machines. By trusting his real friends, Eddy uses his talents to help others and rethinks his purely mechanical definition of success.