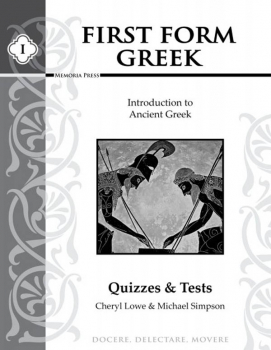 Based on the revolutionary First Form Latin series, First Form Greek is written for parents and teachers with or without a Greek background. Its goal is to present the grammar so logically and so systematically that anyone can learn it. At the same time, we have adapted the Latin First Form Series to account for the differences between Greek and Latin, such as the new alphabet, overlapping sounds, more variation within paradigms, and less regularity. First Form Greek overcomes these challenges with the addition of weekly vocabulary reviews, more frequent recitation, and an "expanded dictionary entry for Greek verbs.

The First Form Greek Quizzes & Tests booklet has reproducible weekly quizzes and unit tests that ensure material is being mastered, and a grading rubric for the teacher.

After finishing First Form Greek, the student will have mastered: