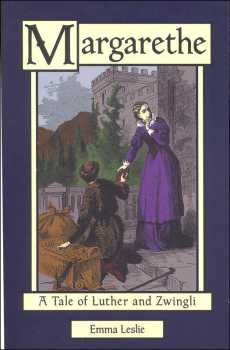 Margarethe: Tale of Luther and Zwingli

In Martin Luther's time, a great divide began to grow between Catholics and the newly-developed Protestant Church. Margarethe is the daughter of a German nobleman"she is proud, headstrong, and fiercely loyal to her younger sister Else. But Margarethe's father plans to marry her off to a count's son, and Else is preparing to leave the home and serve in a convent for the rest of her life. Margarethe, however, believes that God only wants to ruin her life. Her family is destitute (despite their noble titles) and Church's excesses have become too much to bear. She begins to question the doctrine of the Catholic Church and refuses to participate in their ceremonial rites. When all seems lost, she discovers Martin Luther's teachings and reevaluates her relationship with God. The Reformation suddenly begins to develop in earnest, and Margarethe and her closest friends must decide what parts they will play. 280 pgs, sc.

Margarethe, the proud, impetuous daughter of a nobleman in Germany, wants no part in her father's plans to marry her off to Count von Schonstein's son, Eric. She would much rather stay at home with her beloved younger sister, Else, but Else will soon be leaving to spend the rest of her life in a convent. Unlike her gentle, pious sister, Margarethe is certain that God's only desire is to make her life miserable, especially now that she refuses to participate in the rites and ceremonies of the Church. When her brother, Fritz, brings her an "indulgence" from far-off Juterbog, she doubts that even this can make her acceptable to an angry God.

Then from her great-aunt, Margarethe hears of another religion, one almost forgotten, that taught that God loves the world, and she longs to know if this message is true. As the controversy surrounding the teachings of Martin Luther and Ulrich Zwinglius intensifies, she and her dear friend, Anna, along with Fritz and Eric, must decide what part they might play in the emerging Reformation.