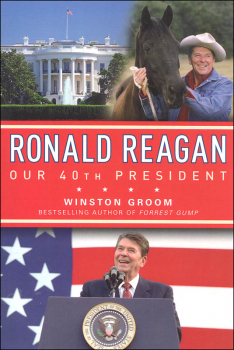 This biography provides readers with a concise and satisfying overview of the life of Ronald Reagan, from his simple Midwestern upbringing until his days in the White House and beyond. Although this biography of President Reagan by Winston Groom is not as comprehensive as others in print, it is a very readable version of our oldest president's life. The book contains nice size print, but no illustrations. 152 pgs, pb. ~ Mike

He was one of Americas true greats. As president, he changed the world, developing a successful strategy for defeating Communism, toppling the Soviet Union, and liberating Eastern Europe (while hardly firing a shot). And just as important, he restored an America that had found itself mired in a malaise of falling living standards, moral decay, and what seemed like inevitable decline.

Though he was our oldest president, Reagan acted as a tonic, rejuvenating Americas economy, restoring her confidence, and attracting a majority of young voters won over by his vision of making America once again a shining city on a hill.

In this superlative biography for young adults, bestselling author Winston Groomauthor of Forrest Gumpgives us the full Reagan, from his Midwestern American boyhood, to his early career as a radio sports announcer, to his days as a Hollywood star and his extraordinary political career as a union leader, governor of California, and president of the United States.

Covering the gamut of Reagans dramatic life, Ronald Reagan: Our 40th President is essential reading, as inspiring as its subject.