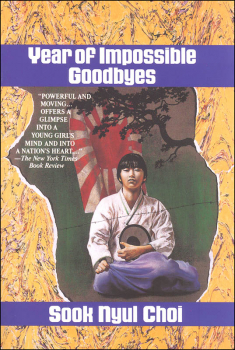 Witness what a life of war and captivity was like through the eyes of a young, brave Korean girl named Sookan. All she’s ever known was their family being controlled by the Japanese soldiers and their captain Narita. Her father went into hiding years ago to escape being thrown into prison, and her brothers had long been taken to a labor camp to help serve the Japanese and their “Heavenly Emperor.” After her grandfather dies, the family continues to feel the effects of war and helplessness. Sookan is forced to go to a Japanese school where children are required to wear Japanese uniforms, and are treated terribly by the teachers. Her mother goes into a withdrawn and depressed state, leaving Sookan and her little brother, Inchun, to fend for themselves in their scary world.

Finally, the Japanese start to retreat, and the Korean’s freedoms start returning. Just when life starts heading to normalcy, the Russians take over and treat the Korean’s just as bad. After Sookan’s mother is taken to a camp, she realizes her only way to escape and have safety is to run to South Korea. The Japanese and Russians can’t control them there. Read all about their experiences in this engaging and educational book. By reading this story, one will also learn some facts concerning Korean culture, language, and religion. 169 pgs, pb.

Note: This book is about war and conflict, and although it is not filled with intense scenes of violence, it does paint some gruesome pictures of the hardships many people experienced. I also noticed a couple of derogatory words, but I didn’t see any curse words.

It is 1945, and courageous ten-year-old Sookan and her family must endure the cruelties of the Japanese military occupying Korea. Police captain Narita does his best to destroy everything of value to the family, but he cannot break their spirit. Sookan's father is with the resistance movement in Manchuria and her older brothers have been sent away to labor camps. Her mother is forced to supervise a sock factory and Sookan herself must wear a uniform and attend a Japanese school.

Then the war ends. Out come the colorful Korean silks and bags of white rice. But Communist Russian troops have taken control of North Korea and once again the family is suppressed. Sookan and her family know their only hope for freedom lies in a dangerous escape to American controlled South Korea.

Category Description for Literature Resources Modern American and World History:
Please note, the recommended book, The House of Sixty Fathers , is currently unavailable from the publisher. This title may be available through your library system.
Primary Subject
Library Builders
Grade Start
8
Grade End
12
ISBN
9780440407591
Author
Sook Nyui Choi
Format
Paperback
Brand Name
Yearling Books
Weight
0.3 (lbs.)
Dimensions
7.62" x 5.19" x 0.44"
Powered by TurnTo
Questions that need answers | My Posts
Start typing your question and we'll check if it was already asked and answered. Learn More
Do not include HTML, links, references to other stores, pricing or contact info.
My question is about: