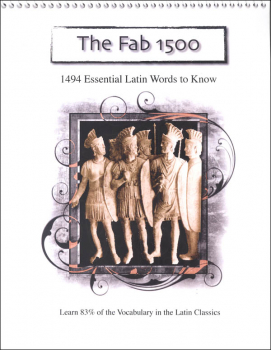 A simple plan for learning/recognizing 83.6% of the vocabulary of three Latin anthologies. The Fab 1500 identifies the basic, and most common Latin vocabulary. Using a reproducible worksheet, an enterprising student will write out, translate, and memorize five words each day; reviewing/testing them every fifth day. Working consistently, in four semesters, this list of 1494 words will be known (and memorized if possible). The list starts with the 300 most frequently used Latin words followed by the remainder. Words are first listed in alphabetical (except for the initial 300) and then, with definitions, according to subject categories identified by Paul Bernard Diederich in 1939. Categories include: Gods, Time, Sky, Fire, Water, Earth, Plants, Food, Animals, People, Body, Mind, Feelings, Talk, Writing/Arts, Work/Play, City/Buildings, Military, Government, Social Approval, Evil, Death, Abstractions, and, lastly, Unclassified. 19 pgs, pb, top-bound, spiral binding, portrait orientation. ~ Janice

Knowing approximately 1500 Latin words enables you to read almost any Latin text without extensive use of the dictionary. The 300 most-used Latin words and definitions are indicated, along with the full 1500 named and defined alphabetically. The words are then sorted by subjects, verbs, adverbs, prepositions, etc. These 1500 words can be considered the basic Latin vocabulary. Comes with Vocabulary Study Plan.