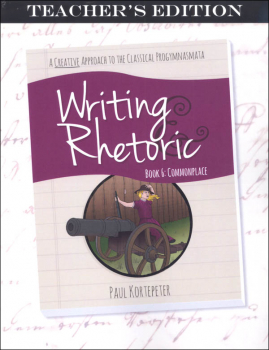 Writing & Rhetoric Book 6: Commonplace continues the development of the art of persuasive writing and oration. Students will learn to create six-paragraph essays that are arguments against the common vices of people and arguments in favor of common virtues. For example, cowardice and boasting are criticized while courage and humility are commended.

In addition to practicing skills they learned in earlier books, students will learn to:

* Use comparison and contrast

* Introduce and conclude an essay

* Use a rhetorical device known as "the contrary

* Invent soliloquies to support an argument