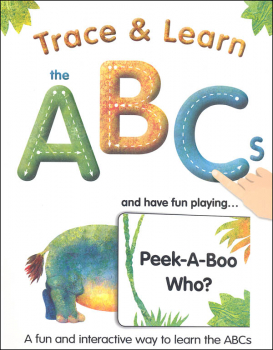 You've probably heard of sandpaper letters that are so helpful for tactile learners (and others) because you can feel them as you finger-trace. Instead of the usual flashcards of sandpaper letters, this clever board book is full of them. Each page has an upper (2.5") and lower case (1.75") textured letter with numbered tracing directions (i.e. for "I" 1 is down, 2 is across the top, and 3 is across the bottom). Then, to keep things interesting visually, there's a lift-the-flap window. On the left, the back side of some animal is visible. On the right is a flap with "Peek-A-Boo Who?" The reader guesses the animal, and then flips the flap to see if they got it right. The animal name along with the rest of it is under the flap, and another animal is on the backside of the flap as well. Letters are printed in basic manuscript and a printed alphabet runs along the bottom of each page with the page's letter highlighted. Background for all pages is white but the animals are colorful, as are the letters. I have to say that I really like the color scheme for the letters not exactly easy to describe bright but muted and they look sand-ish. ~ Janice

Finger Trace the ABCs is the most fun and interactive way to learn the alphabet! Textured letters act as a track kids can follow with their finger as they trace and explore the uppercase and lowercase letters of the alphabet. Beautifully painted letters and animals make this every child's favorite guessing game! Kids learn the correct steps to writing each letter by following the dotted guidelines.

See the order of the alphabet at a glance at the bottom of each page.