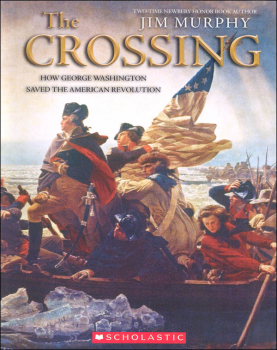 The Crossing is an inspiring and captivating book by the two-time Newberry Honor Book author Jim Murphy. It retells the desperate struggle of George Washington and his inexperienced troops to fight back the British in the pivotal battles of 1776-77. The story is well-written and hard to put down, and the book is filled with significant monochrome illustrations, including historical paintings, drawings, posters, and maps. The back of the book includes the story behind the painting Washington Crossing the Delaware by Emanuel Leutze, a timeline of the Revolutionary War, and a list of Revolutionary War sites. The book measures 8” x 10”. 96 pgs, pb. ~Rachel E.

It is 1776, and George Washington's army of rebellious colonists is emboldened by its stunning victories over the British at Lexington and Concord, and at having driven the world's most formidable army from Boston. But now they face the threat of a brutal British retaliation.

George Washington, who has little military experience, is unanimously chosen as commander in chief in the hope that he can whip his ragtag, unruly troops into a real fighting army. As the British begin their invasion of New York City and out-battle the Americans in one encounter after another, George Washington isn't the only one who is overcome with doubts.

In a breathtaking account of this pivotal moment in the Revolution, Jim Murphy masterfully shows Washington's transformation from gentleman farmer to a brilliant general as he delivers the country from the blackest of times into the brightest of futures.