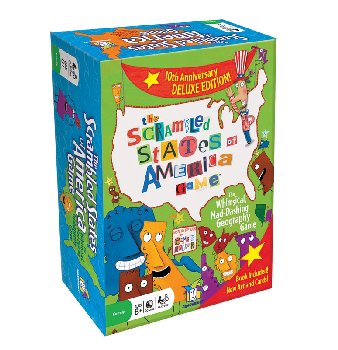 Kids will easily pick up their states, capitals, and U.S. geography as they yell, slap cards down, and use their quick-thinking skills to win state cards and put an impossibly scrambled-up United States back to rights. Each player receives 5 State Cards to create their own "State Line", along with a U.S. map. Then, as a Scramble card is uncovered, players race to fit one of their states to the Scramble card, with clues such as matching the color of the state to the Scramble card, or finding words or names within the state capital. Each of the state cards contains the name of the state, a state outline map, the capital city as well as the state nickname, and, of course, any of this information is fair game to be matched with a Scramble card. When a player is able to match one of their State cards with a Scramble card, they immediately slap it down on the Scramble card and yell out the name of the state. Or, a "Go the Distance" card is played, and the players have to determine which of them has a state that is the closest to that in question, and of course, if they have the lucky card, more slapping and yelling goes on. The game can be played with 2-4 players, and several variations are included to keep it challenging for players of all ages. Loud, noisy, and boisterous as it is, there's plenty of hidden motivations here for them to pick up vital information about each state - and remember it! - Jess

Quick! Find a state that ends with the letter A. Now find one that borders Tennessee. Have fun learning about the United States in this madcap game of observation and quick reflexes. Collect state cards by matching them to a Scramble challenge. Or “Go the Distance” and find a state’s closest neighbor. Win the most cards and call yourself the Head of States! New deluxe edition features new art, new challenges, and a copy of "The Scrambled States of America" book!

Primary Subject
History/Geography
Grade Start
3
Grade End
AD
EAN
759751055059
Format
Other
Brand Name
GameWright
Weight
1.05 (lbs.)
Dimensions
7.75" x 6.0" x 3.19"
Powered by TurnTo
Questions that need answers | My Posts
Start typing your question and we'll check if it was already asked and answered. Learn More
Do not include HTML, links, references to other stores, pricing or contact info.
My question is about: