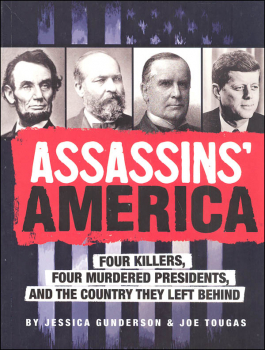 We often hear of America’s assassinated presidents Lincoln, Garfield, McKinley, and Kennedy. Perhaps some of us may faintly recall the names of their assassins. But what about the details of the lives of John Wilkes Booth, Charles J. Guiteau, Leon Czolgosz, and Lee Harvey Oswald before their dreadful acts of murder? Divided into four sections, this book dives deeper into the events surrounding the tragic murders and how they have affected America. The fascinating chapters uncover the early lives of both the presidents and their killers, the crimes, and continue to speculate some on how history may have been different had these events not happened. Because this book covers the topic of assassination, some events described may be somewhat disturbing or sobering to readers. The chapters are very interesting and feature photos, drawings, and timelines. By Jessica Gunderson and Joe Tougas. 208 pgs, pb. ~Sarah E

Abraham Lincoln watched a play. James Garfield walked through a train station. William McKinley shook hands with his public. John Kennedy smiled and waved from a motorcade. In these moments shots rang out and four presidents suffered mortal wounds. Some say their assassins were calculating killers. Others say they were madmen guided by strange notions of the world. Assassins' America examines the lives of each killer and his victim. Their stories are full of twists and mysteries, and even today Americans live with lasting effects of these terrible crimes.