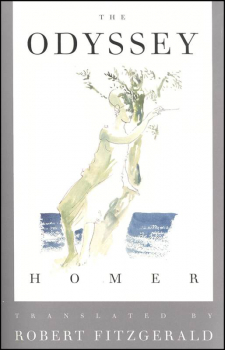 This edition, translated by Robert Fitzgerald translation is my personal favorite, perhaps because it is the first I read, or maybe because the poetry seems to flow better than other translations. It also includes some nice "extras" like an introduction that explains many aspects of the poem, a map, a glossary of names and places, and an intriguing postscript about the story and translation. 516 pgs, pb. ~ Rachel

This edition also features a map, a Glossary of Names and Places, and Fitzgerald's Postscript. Line drawings precede each book of the poem.

Robert Fitzgerald's translation of Homer's Odyssey is the best and best-loved modern translation of the greatest of all epic poems. Since 1961, this Odyssey has sold more than two million copies, and it is the standard translation for three generations of students and poets. Farrar, Straus and Giroux is delighted to publish a new edition of this classic work. Fitzgerald's supple verse is ideally suited to the story of Odysseus' long journey back to his wife and home after the Trojan War. Homer's tale of love, adventure, food and drink, sensual pleasure, and mortal danger reaches the English-language reader in all its glory.

Of the many translations published since World War II, only Fitzgerald's has won admiration as a great poem in English. The noted classicist D. S. Carne-Ross explains the many aspects of its artistry in his Introduction, written especially for this new edition.

After being out of print, it's a pleasure to have this study once again available. With an emphasis on interactive discussion and worldview, the guide provides a lesson-by-lesson framework for studying some of the major works of ancient literature - The Epic of Gilgamesh, The Odyssey, Oedipus Rex, Oedipus at Colonus, and Antigone. Using an inductive approach, the student is encouraged to use three steps - observation, interpretation, and application - in coming to an understanding of the literary piece. Only after spending some time reading, absorbing, and comprehending the selection does the student seek to discover what others have said about it. The goal is for the student to be able and prepared to evaluate the opinions of others because they have formed their own thoughts first as opposed to just internalizing what others have thought and written.

The course is divided into 24 lessons, each one taking about a week to complete. This is just about right for the literature component of a high school English course. You could easily lengthen the course to encompass the entire school year (30 or 36 weeks) by inserting writing assignments between the sections. As an example, let's look at the study of Oedipus Rex, which starts with some background information on the Greek Theater. This is to bring the student "up to speed" so to speak and includes all the basic information that a Greek theater-goer would know - such things as the story of Oedipus, how the play is organized, and who appears in the play. There are five lessons covering this reading selection, each organized similarly. First is a list of People and Places along with vocabulary that the student is expected to be able to identify and define. Then follows some reading sections, each accompanied by a set of comprehension questions (i.e. who, what, describe, how, etc.) An early lesson in the series gives some instruction on a literary analysis device - Dramatic Irony - and subsequent lessons ask the student to look for examples. In the second lesson in the series, an Overview Chart is introduced. The student uses this graphic organizer to identify and organize the main events and characters from the play. The series of lessons concludes with an in-depth Essay Question. The course includes four lessons on biblical literature and the Epic of Gilgamesh, four on The Odyssey, five lessons on Oedipus, five on Antigone (please note that both Sophocles' Antigone and the twentieth century play by Jean Anouilh are studied), and a final summary lesson.

The text is designed as a consumable student workbook providing space to write the short essay answers to the comprehension/discussion questions. It could easily be used as a non-consumable by having the student keep answers in a separate binder/notebook. There are no answers given or an answer key. The parent/teacher is encouraged to be a participant along with the student in completing the readings and discussions. Although I understand this rationale and even agree that this approach is optimum, nevertheless, speaking as a mom, I would have appreciated some talking points.

Compared to some, this is a relaxed study. This should not be interpreted as "lightweight." There's plenty here - both in organization and in the literature selections and discussion - to provide a challenging examination of ancient literature. One of the best features of the entire course is the fact that it starts with a four-lesson study of Daniel (the literature and culture of the Babylonians) and Genesis (creation, flood, and Tower of Babel) in order to assure that the student is well-grounded in biblical events and principles. Another excellent feature is the final worldview lesson. Although most ancient literature is the literature of pagans, this study provides the biblical grounding to make certain the study is profitable.

Although a specific book list is not provided, it's obvious that specific versions of these works are being referenced because of the page numbers given throughout the lessons. ~ Janice