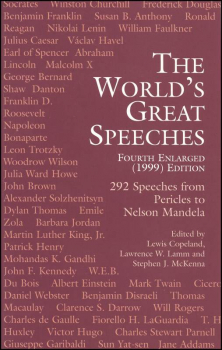 Many great people and many great times throughout the history of the world have been remembered through speeches. It's easy to think of some of these in the modern times Martin Luther King Jr.'s "I Have a Dream," Richard Nixon's speech to astronauts on the moon, John F. Kennedy's inaugural address, and Winston Churchill's "Their Finest Hour," for example. Perhaps not so easy to name are some of those speeches that have held their place in time throughout the centuries such speeches as Julius Caesar's "On the Treatment of the Conspirators," Socrates on his condemnation and death, Danton's "To Dare Again, Ever to Dare!" and Martin Luther before the Diet of Worms. Divided into seven parts, the 292 speeches in this book are drawn from: Earlier Times (Ancient Greece and Rome, Great Britain and Ireland, the early United States, Canada, South America, South Africa, India, and China), Recent Times (US domestic affairs, world affairs and WWII, and US affairs and WWII), Modern Times (US government, international affairs, and the United Nations), Informal Speeches (of the last two centuries), Important Speeches of the Sixties, Speeches by Black Americans, and Speeches from the period 1974 1997. From Pericles and Isocrates to Alexander Solzhenitsyn, Ronald Reagan, and the Earl of Spencer, these speeches are a great resource for history, inspiration, quotations, and much more. Speeches are indexed by topic, by nationality, and by speaker for ease of reference. ~ Zach