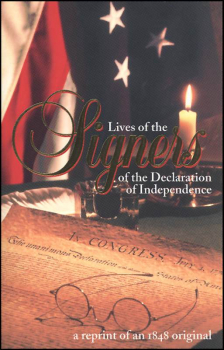 Lives of Signers of Declaration of Independence

Another patriotic book from Wallbuilders, this one is a reprint of the book originally published in 1848 by American historian B.J. Lossing. It looks like a reprint, too, in both font and illustration. The original language is unchanged; for instance, the first chapter, in discussing Josiah Bartlett of New Hampshire, states that he practiced medicine, "his business soon became lucrative, and he amassed a competency." I'm not sure what a competency is, and my Webster's American Family Dictionary doesn't define this word I suppose his net worth increased. But by and large, the text is quite understandable.

About two-thirds of the book is what you would expect it to be from the title. Each of the 56 signers of the Declaration get about three to five pages of biographical text. The facts of each man's life are presented in a straightforward manner. The remaining third of the book is a discussion of the Declaration of Independence and some of the major events that brought it about. Next, the Articles of Confederation is presented, again including discussion of the surrounding history. Then, the Constitution is printed, also with historical context. Finally, if you've been dying to read the Stamp Act, that hated piece of legislation forced on the colonies, it is here too.

This book will give insights into this collection of gifted leaders to which we owe our freedom and rich history. sc, 384 pgs.