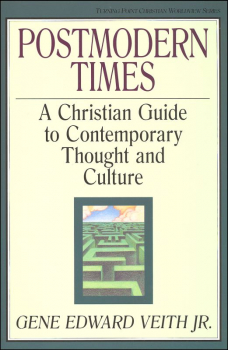 The apostle Paul was an effective evangelist in the first century because he was able to understand how people of a different culture thought about the important issues of life, then helped them connect their beliefs to the truth of God. For the church to be successful today, we need the same skill. You would think this should be easy, since we live in our own culture, but author Gene Edward Veith, Jr. believes some of us have missed the transition from modernism to postmodernism. Modernism was marked by a belief in scientific rationalism, humanism, and bias against the past. Postmodernism maintains that there is no absolute truth, that all truth is relative. While a modernist might believe that Christianity is not true because of some perceived scientific or historical conflict, a postmodernist believes that Christianity is not true because it cannot be the only truth or the absolute truth, and is therefore dismissed because it is intolerant.

This is the overview. Veith, a regular contributor to World Magazine, delves into details in four major areas: thought, art (including architecture, television, movies, and literature), society (family, government, and daily life), and religion. I generally avoid philosophy-type books because they are often difficult to understand, but this book is very readable and gives specific examples, an important step in helping me grasp ethereal concepts. Well worth reading to get a handle on what passes for thinking in our times. 256 pgs, pb.