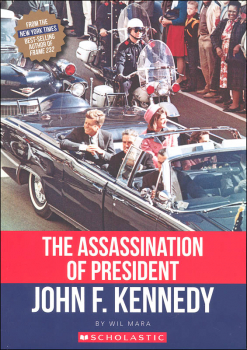 The assassination of John F. Kennedy has left a significant mark on our society. This book details the entire day of the assassination. Furthermore, it looks into the life of Lee Harvey Oswald, the man who assassinated Kennedy. Different perspectives and conspiracies concerning the assassination are also discussed. This Scholastic book is very informative and interesting as young readers learn the official story of what happened on that critical day. ~ Gina

On November 22, 1963, President John F. Kennedy was shot and killed as rode through the streets of Dallas, Texas, in the back seat of a convertible. Decades later, details of the event remain shrouded in mystery. Readers will uncover the evidence surrounding the assassination as they learn the official story of what happened that fateful day. They will also get a glimpse at some of the many alternate theories about who shot President Kennedy, and why.