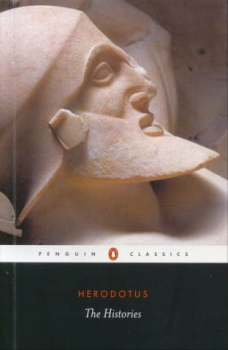 This masterpiece of classical literature was written by Herodotus in Greek and translated into English by Aubrey De Selincourt. It offers a Greek view of the world in the fifth century BC and includes information about many outside countries and people. The background story of the book is about a small group of Greek city-states uniting to defeat the Persian empire, but there are many digressions in the book that share about monuments, religious beliefs, customs, and natural wonders of Greece and other countries. The author, being Greek, highlights the fact that the Greek way of life is superior, but his avid description of other peoples and their cultures shows that he respected them as well. Herodotus includes facts about battles, wars, and soldiers, but also describes the Nile, praises Egyptian monuments, shares legends from other countries, describes inventions of the day, details geographical features, and so much more. It's a great blend of information and, though long, it is interesting to read. Notes are included to define people and terms that the average reader would be unfamiliar with. This edition also includes an introduction about the author and the text, a chronology, and a glossary. 716 pgs, pb. ~ Rachel