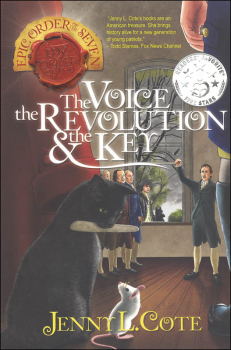 Picking up from where The Roman, the Twelve, & the King left off in 1743 London, the team must take on a new assignment: the rise of a young nation across the sea. Each is tasked with aiding a young leader through their rise to prominence, guiding them as they struggle, fail, and eventually succeed. Liz aids young Patrick Henry while Max is sent to protect George Washington during his military service and Nigel helps Benjamin Franklin in his experiments. Back in Europe, Al is left to play spy under the nose of King George III while Kate guides the young Marquis de Lafayette. 512 pp. SC.

1 voice rallied a nation to Independence with 7 words:
"Give meLiberty, or Give me Death!"

The Order of the Seven musthelp birth one nation under God by entering the lives of a unique generation of children chosen to become the Founding Fathers of America. Liz is given the assignment of helping Patrick Henry become the Voice of the Revolution, setting the entire war inmotion. If Max can't protect George Washington, the patriots will lose the Sword of the Revolution to lead them.Nigel must ensure that Benjamin Franklin's efforts succeed,and Al must gather intelligence right under the nose of theKing of England.Victory will be impossible without the powerful ally of France tojoin in the fightled byits patriotic son, the Marquis de Lafayette. But will Kate be able to protectthe young Marquis in time? The fight for liberty will be costly, with an enemy determined to give the patriots and anyone who helps them the other course"death.