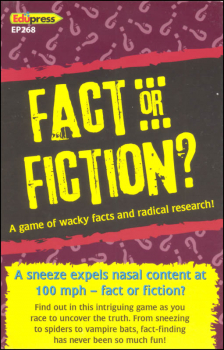 Tuck this into your pocket or purse before that next car trip and you'll be there in no time! Alternately a curriculum booster and a party game, this 200+ statement deck can equally be a springboard for a research project or an group ice-breaker. It's simple to play and contains none of the obnoxious or vulgar material similar party games might include nor does it ask you to "bluff an answer (which some might object to as encouraging deception). Instead, it simply provides a statement that you have to decide is fact or fiction such as, "Cochineal and carmine are two red colorings used in food and cosmetics that are made from ground-up bugs. Wouldn't you like to know whether that was fact or fiction before you consumed that next strawberry smoothie from Starbucks or glass of Ocean Spray ruby red grapefruit juice? Moreover, might it not send you running to the nearest computer or smart phone to find out? Then, might you not want to write a nice research paper on unusual food additives that most people would cringe about? Whether you play as a guessing game, use for discussion, assign as a research topic, or race to see who can most quickly find the answer, your kids will have fun learning. By the way, did you know that, "Hippopotamuses have killed more people in Africa than any other large animal - or have they?

Over 200 spectacular statements find out what's fact and what's fiction in this intriguing game!

* Points are earned for correct answers, speed and the type of sources used

* Packed with more than 200 spectacular statements

Primary Subject
Curriculum
Grade Start
3
Grade End
AD
EAN
765515002689
Format
Other
Brand Name
Edupress
Weight
0.35 (lbs.)
Dimensions
6.5" x 3.62" x 0.75"
Powered by TurnTo
Questions that need answers | My Posts
Start typing your question and we'll check if it was already asked and answered. Learn More
Do not include HTML, links, references to other stores, pricing or contact info.
My question is about: