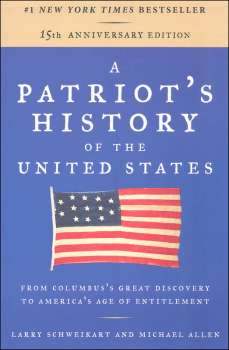 Although this book was written by a couple of university history professors, it is a refreshing change from the beat-up-on-America crowd. No anti-white-male, anti-Christian, anti-firearm, anti-capitalism stuff here. Instead, the authors speak of a nation to be proud of, a nation that loves public virtue, personal liberty, and private property.

This 15th anniversary edition is the size of a textbook packed with 981 pages, including footnotes and an alphabetical index. However, the text is very readable and interesting, and no review questions are provided. Occasional sidebars delve deeper into a particular subject without detracting from the flow of the story. The book begins with the discovery of the New World by Christopher Columbus and ends with the war in Iraq and Iraq's liberation. Various eras in our history get about the same amount of ink, with the exception of the Civil War, which is covered in greater detail.

I can't say enough positive about the tone of the book. One of the sentences in the conclusion reads, "The fatal flaw of bin Laden - like Hitler, Stalin, and even the nearsighted Spaniards of 500 years ago - was that they fixed their gaze on the physical manifestations of the wealth of the West, failing to understand that wealth is a mere by-product of other, more important qualities: initiative, inventiveness, hope, optimism, and, above all, faith." Makes you proud to be an American. ~ Bob

Over the past decade, A Patriots History of the United States has become the definitive conservative history of our country, correcting the biases of historians and other intellectuals who downplay the greatness of Americas patriots. Professors Schweikart and Allen have now revised, updated, and expanded their book, which covers Americas long history with an appreciation for the values that made this nation uniquely successful.