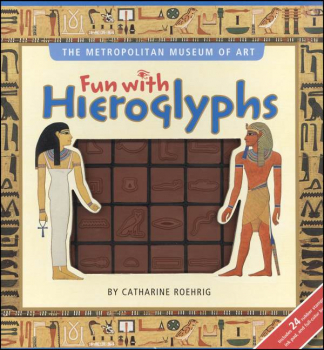 Learn to write like the ancient Egyptians did - with hieroglyphs. Although they were probably first used as pictures, hieroglyphs eventually began to represent sounds. There are 24 hieroglyphs representing the single sounds found in the Egyptian language, and these hieroglyphs can be used like letters of the alphabet to make words and sentences. This kit includes 24 rubber hieroglyphic stamps, a black inkpad, an alphabet chart, and a 48-page softcover book. The book covers a wide range of details regarding the orientation of hieroglyphs, counting with hieroglyphs, hieroglyphic clues, deciphering hieroglyphs, and much more. Stamps measure 7/8" x 7/8". -Enh