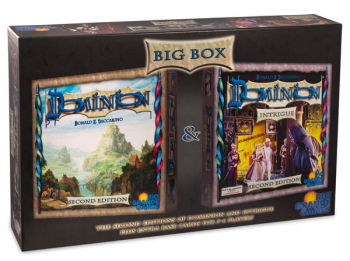 The new version of the Dominion Big Box has both Dominion and Intrigue second editions plus enough base cards to play with 6 players.

True to form, this unique card game has completely dominated our game nights! I don't even know how many games (hundreds?) we've played in the last year or so. If we have a spare hour, you'll probably find us at our friends' house, playing a game or two. Dominion is composed of three different types of cards: treasure cards (copper, silver, and gold), victory point cards (estates, duchies, and provinces), and over 20 different action cards. Your goal is to have the most victory points at the end of the game.

To begin, 10 action cards are chosen randomly and laid out in piles (there are ten copies of each card) on the table alongside the treasure and victory point cards. All of these cards are now available for purchase. Each card has a cost, ranging from 0 (a copper) to 8 (a province), although the majority of the cards cost between 3 and 5 coins. Each player starts the game with their own personal deck consisting of 7 coppers and 3 estates. To begin, each player shuffles their deck and takes five cards into their hand, leaving the rest of their deck face down as a "draw" pile. Play moves clockwise around the table with one person playing at a time. Players use the cards in their hand to buy additional cards. There are two phases to each turn - a player may play one action card, and then he may buy one card. When he is finished, his entire hand is placed in a discard pile and he draws five more cards for his next turn. Whenever the draw pile runs out, the discard pile is shuffled and placed back in the draw pile.

The action cards vary greatly, but all are designed to better your deck and enhance future turns. There are action cards that give you extra buys, extra coins, extra actions, and extra cards in your hand. These four elements (in a variety of different combinations and variations) are the most common, but there are plenty of other unique action cards as well. Some of these allow you to gain a card costing up to four coins, play an action card twice, discard cards out of your hand and replace them with new cards from your draw pile, trash a card from your hand and gain a card costing up to two coins more, etc. Attack cards help you and affect other player's decks at the same time (each other player discards two cards, each other player must take a victory point card out of their hand and place it back on their draw pile, steal a treasure card out of another player's hand). By buying action cards as well as better treasure cards, eventually your deck will be rich enough that you can begin to buy some of the more expensive victory point cards. It's a careful balance, though, since victory cards cannot be used during game play but are kept in the deck just like the rest of the cards - if you begin buying points too early, they clog up your hand and weaken your deck, but if you start buying them too late, there might not be many left! Please note that some families may object to a card or two, although these can easily be removed from play without detriment (such as the Witch, which is an attack cards that gives Curse cards - worth -1 victory points - to other players). The variety of action cards makes each game different from the last, and smart players will soon pick up on which cards interact well together and which cards render others virtually useless. Each new mixture of action cards requires a slightly different strategy in order to win the game.

The combinations are endless, especially since there are also multiple expansion sets available. These sets offer all new cards which can be mixed in with the originals for even more variety. We recommend that beginners start with only the original cards to get used to the game play before adding an expansion, but it won't be long before you're ready for more! We have played each expansion, and we have not yet begun to tire of this game. For 2-4 players. The only question is, who will dominate at your next game night?