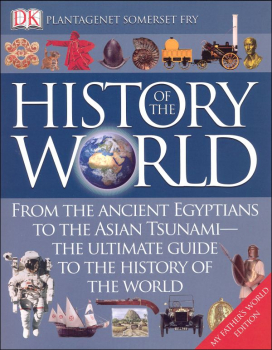 History of the World

This exclusive My Father's World version is based on the 3rd (green) edition, but begins with "The First Civilizations" (B.C.), omitting 22 pages of prehistoric man and animals found in other editions. This beautiful, full-color, 378-page hardcover book would be a great addition to any family library, and is especially recommended for junior high, high school, and parent reference.
Primary Subject
History/Geography
Grade Start
4
Grade End
AD
ISBN
9780756670795
Author
Plantaganet Somerset Fry
Format
Hardcover Book
Brand Name
Dorling Kindersley
Weight
3.55 (lbs.)
Dimensions
11.12" x 9.0" x 1.0"
Powered by TurnTo
Questions that need answers | My Posts
Start typing your question and we'll check if it was already asked and answered. Learn More
Do not include HTML, links, references to other stores, pricing or contact info.
My question is about: