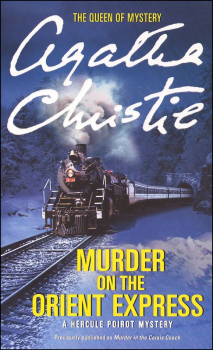 Murder on the Orient Express

By renowned mystery writer Agatha Christie, this is one of the many featuring her clever detective character Hercule Poirot. Hercule is on a train bound for Paris, the Orient Express. There are around fifteen other passengers, and one of them is of particular interest. He is found murdered in his compartment on the same night the train is stopped in its tracks by a snow drift. Unable to continue, the train and its occupants are stranded for an unknown period of time, during which Hercule investigates the crime and interviews his fellow passengers, for it is clear that the murderer has not left the train. 315 pgs.