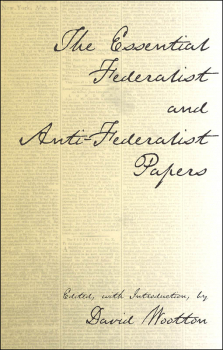 Joined as one to establish independence from Great Britain, America's first leaders spent ten years to develop the ideals found in the Declaration of Independence into a unified constitution. The idea of a centralized government resulted in a great debate between the Federalists and the Anti-Federalists. The Federalists wanted to ratify the Constitution; the Anti-Federalists did not. This single volume contains a selection of the classic critiques to the Constitution and thirty-three of the most crucial Federalist papers. Also includes an author's introduction that examines the history of our American principles of government along with their Scottish, English and French roots. 343 pgs. pb. ~ Deanne

Here, in a single volume, is a selection of the classic critiques of the new Constitution penned by such ardent defenders of states' rights and personal liberty as George Mason, Patrick Henry, and Melancton Smith; pro-Constitution writings by James Wilson and Noah Webster; and thirty-three of the best-known and most crucial Federalist Papers by Alexander Hamilton, James Madison, and John Jay. The texts of the chief constitutional documents of the early Republic are included as well.

David Wootton's illuminating Introduction examines the history of such "American" principles of government as checks and balances, the separation of powers, representation by election, and judicial independence"including their roots in the largely Scottish, English, and French "new science of politics." It also offers suggestions for reading The Federalist, the classic elaboration of these principles written in defense of a new Constitution that sought to apply them to the young Republic.