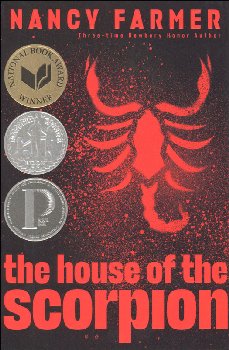 House of the Scorpion

This is the first book of a series by Nancy Farmer. Touching on some controversial issues of today, the setting of this novel is in a futuristic time when human clones are readily made. The main character is Matt, a clone harvested from the DNA of El Patron, a wealthy opium dealer. Matt lives in isolation, is treated poorly, and barely escapes death when his life is threatened. Matt finally learns why he was created. Will he have an opportunity to grow into a kind and decent man? Find out as you unravel the mysteries of this intriguing plot. A reading group guide follows this story making it an ideal pick for a book club. Newbery Honor Book. 380 pgs. pb

This modern classic takes on an iron-fisted drug lord, clones bred for their organs, and what it means to be human. Winner of the National Book Award as well as Newbery and Printz Honors.Matteo Alacrn was not born; he was harvested. His DNA came from El Patrn, lord of a country called Opiuma strip of poppy fields lying between the United States and what was once called Mexico. Matt's first cell split and divided inside a petri dish. Then he was placed in the womb of a cow, where he continued the miraculous journey from embryo to fetus to baby. He is a boy now, but most consider him a monsterexcept for El Patrn. El Patrn loves Matt as he loves himself, because Matt is himself.As Matt struggles to understand his existence, he is threatened by a sinister cast of characters, including El Patrn's power-hungry family, and he is surrounded by a dangerous army of bodyguards. Escape is the only chance Matt has to survive. But escape from the Alacrn Estate is no guarantee of freedom, because Matt is marked by his difference in ways he doesn't even suspect.