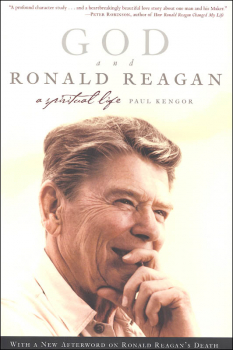 Years before his famous, "Mr. Gorbachev tear down this wall" speech, former President Ronald Reagan felt called to be God's instrument in this world. From simple beginnings in small town America where he was raised in the church by a faithful mother; to celebrated Republican and former staunch Democrat; from actor turned state governor to the highest office in the United States, Mr. Reagan sought to honor God and his Christian faith. Weaving together historical events, speeches and correspondences, and the memories of friends and family, Dr. Kengor presents a captivating look at the life of a man who firmly believed that all individuals mattered and had worth. Well written and researched, this book demonstrates to teens and parents alike the power of a life submitted to God. Used in Notgrass Exploring Govt. SC. 419 pgs. ~ Deanne

Ronald Reagan is hailed today for a presidency that restored optimism to America, engendered years of economic prosperity, and helped bring about the fall of the Soviet Union. Yet until now little attention has been paid to the role Reagan's personal spirituality played in his political career, shaping his ideas, bolstering his resolve, and ultimately compelling him to confront the brutal -- and, not coincidentally, atheistic -- Soviet empire.

In this groundbreaking book, political historian Paul Kengor draws upon Reagan's legacy of speeches and correspondence, and the memories of those who knew him well, to reveal a man whose Christian faith remained deep and consistent throughout his more than six decades in public life. Raised in the Disciples of Christ Church by a devout mother with a passionate missionary streak, Reagan embraced the church after reading a Christian novel at the age of eleven. A devoted Sunday-school teacher, he absorbed the church's model of "practical Christianity" and strived to achieve it in every stage of his life.

But it was in his lifelong battle against communism -- first in Hollywood, then on the political stage -- that Reagan's Christian beliefs had their most profound effect. Appalled by the religious repression and state-mandated atheism of Bolshevik Marxism, Reagan felt called by a sense of personal mission to confront the USSR. Inspired by influences as diverse as C.S. Lewis, Whittaker Chambers, and Aleksandr Solzhenitsyn, he waged an openly spiritual campaign against communism, insisting that religious freedom was the bedrock of personal liberty. "The source of our strength in the quest for human freedom is not material, but spiritual," he said in his Evil Empire address. "And because it knows no limitation, it must terrify and ultimately triumph over those who would enslave their fellow man."

From a church classroom in 1920s Dixon, Illinois, to his triumphant mission to Moscow in 1988, Ronald Reagan was both political leader and spiritual crusader.

Like the other Notgrass high school courses, Exploring Government is a well-constructed course with a strong underlying biblical and Christian worldview. Written with the three-fold purpose of educating, inspiring, and (sometimes) warning, there is an emphasis on the biblical basis for government and on understanding the U.S. Constitution. The one semester (1/2 credit) course of 75 lessons is organized into four Parts divided into 15 (weekly) Units. Part 1 provides background information to the formation of American government - the history and development of the idea of government - as well as the aforementioned biblical basis along with a look at the U.S. from the standpoint of being an exercise in government formation. Part 2 examines the U.S. Constitution, the three branches of American government, and the constitutional amendments. Part 3 covers state and local governments along with taxes and budget. Part 4 takes a look at the issues currently facing our government. Each Unit includes an Introduction Page which gives a brief overview of the Unit, lists the lessons for the Unit, and gives a suggestion for an activity - usually writing ideas.

The Curriculum Package includes the Student Text and a collection of historical documents, essays, & speeches called We Hold These Truths (217 pgs, hc). The 387-page, hardcover Student Text provides 2-4 pgs of highly readable, succinctly written text for each lesson along with any additional assigned readings from WHTT. Illustrating graphics are well-chosen but not excessive and (disappointingly) black and white although I'm sure this helps to keep the course affordable. As the course progresses the student is continually encouraged to examine the difference between government and politics as well as between what is and what should be. An interesting collection of documents, the WHTT book contains a good selection of "founding fathers" material - the Declaration of Independence, the Articles of Confederation, the Constitution, and others from this time period - as you would expect. There are also some interesting documents highlighting the development of American governmental philosophy (i.e. Magna Carta, etc.) and some key constitutional issues (separation of church and state). There is another collection of recent documents on contemporary issues (the Ten Commandments controversy) but relatively little from the 19th and early 20th century. This is probably due to the fact that many of those documents were included in Exploring America, the author's U.S. History and Literature course. The Quiz and Exam pack which is optional includes both an exam book and an answer key. For each Unit there are sets of lesson review questions and quizzes. There are three comprehensive exams - one for each five Units). The answer key is exactly that - answers to the review questions, the quizzes, and the exams. In general this is a well-done course providing a solid overview of government with a readable text. I could wish the review questions and quizzes relied just a little more on critical thinking and less on information recap. However, the writing assignments are thought provoking and essay-writing is an excellent way to develop critical thinking skills. The author suggests that students can expect to spend about an hour per day on reading and questions. For the teacher/parent there's little that must be done except grading but both parents and students will undoubtedly profit from related discussions. ~ Janice