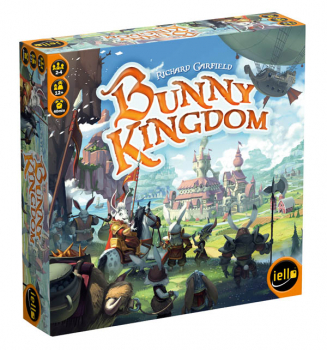 It’s time to let your hares down and settle new lands for the Bunny Kingdom! Don’t let the cute theme fool you; this is a game for seasoned cottontails. New lands have been discovered, and the race is on to explore, settle, and develop it in the name of the Bunny King. Players take on the role of Rabbit Lords as they establish fiefs across a 10 x 10 landscape and earn Golden Carrots by the fruit (or vegetable) of their labors. Across four rounds, players cycle through three phases: Exploration, Construction, and Harvest. The first involves being simultaneously dealt cards, playing a couple, and passing them around the table. These cards add hidden scoring goals, colonize territory (fiefs), and allow you to build buildings to harvest special resources or increase the Strength of fiefs – adding a multiplier to the points that fief earns. After any new buildings are constructed in the second phase, the Harvest ensues, and fiefs are scored. As the game progresses, space comes at a premium, and players struggle to make the most out of their controlled territories. When the fourth round comes and goes, final scoring commences; hidden goals are finally revealed, frequently upsetting the balance of power and letting an underdog snag victory! Compared to similar strategy games, Bunny Kingdom tends to play faster and feel more open-ended, with several paths to victory and a feeling of fresh opportunity every time. A well-balanced two-player variant adds further options, and the relatively simple mechanics allow game-savvy kids as young as 12 play competitively. For 2-4 players ages 14 and up. 45-minute playtime.

Play as Rabbit Lords conquering a new world on behalf of the Bunny King.

Take control of vast Territories across the New World, build Cities, and farm Resources to make your Fiefs prosper and harvest precious Golden Carrots. Don't forget to satisfy the King by accomplishing missions on behalf of his Majesty.

Each choice can bring you closer to victory, but only one of you will be named "Big Ears" by the Bunny King...

Will you be worthy?