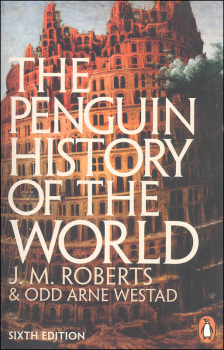 First published in the mid 1970s, the now 6th edition of this book has been revised and expanded to include recent changes across the globe encompassing turbulent events, environmental concerns, international order and the diversity of human life and achievement. Divided into eight sections, called books, each focuses on a different cultural period. Book 1, Before History, goes back millions of years as it traces common theories on the origin of life. Book 2 covers Civilizations, including Ancient Mesopotamia, Ancient Egypt, the beginnings of South Asia, Ancient China, Eastern Asia, other Ancient Worlds and nomadic groups. Book 3 centers on the Classical Age period of the Greeks, Greek Civilization, Hellenistic World, Rome, Christianity and Western transition, classical India and China. Book 4 introduces the Age of Diverging Traditions including the Central Eurasian Crossroads, Islam and Arab empires, Byzantium, the New Middle East and making of Europe, India, Imperial China, Japan, the First Revolution of Europe and more. Book 5 focuses on the Making of the European Age - Qing China and Mughal India, and early modern Europe through how the great changes in Europe was the starting point of modern history. Book 6 considers the great changes that occurred in our world beginning in the mid 18th century. Topics include the political changes in an age of revolution, the new Europe, political change in the Anglo-Saxon world. European Imperialism and Asia's response to a Europeanizing-world are also summarized. Book 7 bring us to the the first and second world wars, the new Asia, the Ottoman heritage and Western Islamic lands and the shaping of the a new world. Book 8, titled, the Our Own Time, includes how new research and discoveries have affected our study of history. This section also includes the Cold War and the transitions to the 21st century. Here we explore perspectives, new world orders, and the potential future of a truly global society. Based on the original works of J.M. Roberts and updated by Odd Arne Westad, the Penguin History of the World (6ed) is a key resource for understanding our place in the chronicles of global history. Contains a complete listing of the nearly 100 maps and a comprehensive index.1260 pgs, pb. ~ Deanne/Ruth

The completely updated edition of J. M. Roberts and Odd Arne Westad's widely acclaimed, landmark bestseller The Penguin History of the World For generations of readers The Penguin History of the World has been one of the great cultural experiences - the entire story of human endeavour laid out in all its grandeur and folly, drama and pain in a single authoritative book. Now, for the first time, it has been completely overhauled for its 6th edition - not just bringing it up to date, but revising it throughout in the light of new research and discoveries, such as the revolution in our understanding of many civilizations in the Ancient World. The closing sections of the book reflect what now seems to be the inexorable rise of Asia and the increasingly troubled situation in the West. About the authors: J.M. Roberts, CBE, published The Penguin History of the World in 1976 to immediate acclaim. His other major books include The Paris Commune from the Right, The Triumph of the West (which was also a successful television series), The Penguin History of Europe and The Penguin History of the Twentieth Century. He died in 2003. Odd Arne Westad, FBA, is Professor of International History at the London School of Economics. He has published fifteen books on modern and contemporary international history, among them The Global Cold War, which won the Bancroft Prize, and Decisive Encounters, a standard history of the Chinese civil war. He also served as general co-editor of the Cambridge History of the Cold War.