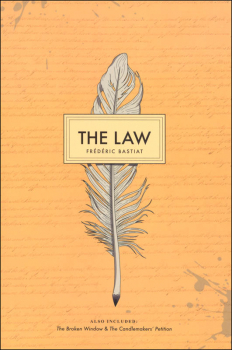 Thomas Jefferson once wrote, The God who gave us life, gave us liberty. Statements such as this would have been understood by most Americans years ago, but in modern American society where neither the value of life or liberty is truly comprehended, these remarks are received as mere platitudes. The classic book entitled The Law, written centuries ago by a Frenchman named Frederic Bastiat, provides modern Americans who have embraced secularism and socialism with the principles they need to regain the true freedom they have lost. The author does a masterful job at unmasking the lies and falsehoods of politicians that promote collectivism and tyranny while claiming to be compassionate guardians of the people. Bastiat helps modern readers to recognize both the value and limitations of law, and why a right view of the law and of limited government is so necessary to a free society. This edition of The Law also contains a valuable foreword by the well-respected economist, Walter E. Williams as well as "The Broken Window" and "The Candlemakers' Petition." Students of economics or political science should consider this classic book to be worthwhile reading. 88 pgs, pb. ~ Mike

The Law is Frederic Bastiat's timeless defense of the free society. With his characteristically clear writing, Bastiat lays out the formula for the proper role of the state in a free society.

This edition of The Law, translated into English by Dean Russell, is published by the Foundation for Economic Education (FEE), and features a foreward by fame economist Walter Williams.