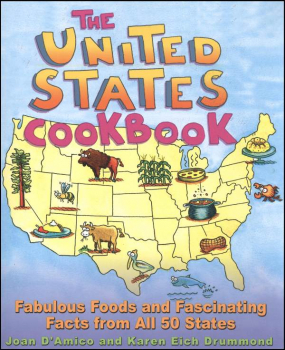 Add a yummy dimension to your state studies by cooking up and sampling a "signature" food from each state. The fifty states are split up into seven regional groups. Each state is introduced with the basic facts including capital, state bird and flower, major cities, and so on. A little dash of state history is thrown in before we move on to the main course - finding out about the state foods, and then actually cooking one up! The recipes are straight forward enough that older kids can make these on their own, while younger kids will probably need some help. For those less proficient in the kitchen than Mom, the first pages serve as an introduction to the tools of the kitchen, as well as some tips and advice on cooking and cooking safely. Let's see, we'll start with Rhode Island "Coffee Milkshakes," and then move on to Massachusetts for Boston baked beans, and then head to Illinois for deep-dish pizza, and on to Washington for baked apples and then to. - Jess