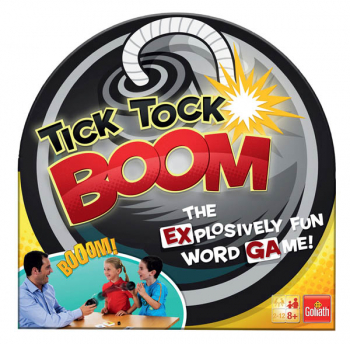 This "Explosively Fun Word Game" will keep players on their toes! To begin each round, a player rolls the die which will land on a "tick," "tock," or "boom." That will determine whether the letters on the card have to appear at the beginning of words, at the end of words, or in the anywhere in words. Then the player presses the button on the "bomb" timer to begin the round and turns over a card. Cards contain a 2-3 letter combination. For example, you roll a "tick" which means the letters start the word and the card overturned displays "SOR". You may shout out "sorry" or "sorrow" or "sort." Play is similar to hot potato shout out your word and pass the timer to the next player; if the bomb "explodes" on your turn, you receive the card (and penalty points!). The bomb explodes randomly at 20-90 second intervals, so you never know when it's going to go off! For 2-12 players; requires 2 AAA batteries, not included. ~ Megan

Pressure is on in this explosively fun word game.

Players draw a card, call out a word with the letters on the card, then pass the bomb

Top seller in Europe for more than a decade

Primary Subject
Games, Puzzles & Toys
Grade Start
3
Grade End
AD
Format
Other
Brand Name
Goliath
Weight
0.0 (lbs.)
Powered by TurnTo
Questions that need answers | My Posts
Start typing your question and we'll check if it was already asked and answered. Learn More
Do not include HTML, links, references to other stores, pricing or contact info.
My question is about: