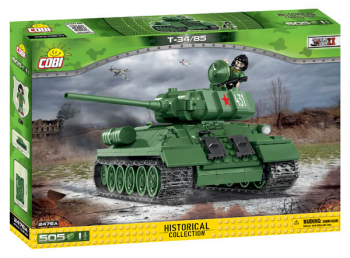 The T34/85 was a Soviet medium tank in production between 1944 and 1957. There were about 80,000 produced during that time. It was equipped with a cannon of a greater firepower than its predecessor, the T35/76. The diesel engine powered two rear wheels. These tanks were in service in 30 different armies including Russia, Poland, Hungary and Vietnam. In some countries they serve even today (ex. in Yemen).

This historically accurate block model of the tank has a rotating turret, a barrel that moves up and down, 2 operable trap door and bonnet. Additionally, there is a shovel, revolver, headset and a machine gun.

Primary Subject
Games, Puzzles & Toys
Grade Start
1
Grade End
AD
EAN
5902251024765
Format
Other
Brand Name
COBI
Weight
1.85 (lbs.)
Dimensions
12.0" x 17.62" x 2.38"
Powered by TurnTo
Questions that need answers | My Posts
Start typing your question and we'll check if it was already asked and answered. Learn More
Do not include HTML, links, references to other stores, pricing or contact info.
My question is about: