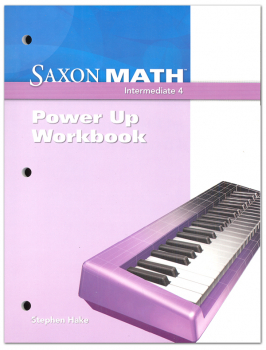 The Power Up Workbook (similar to the Meeting Book at the third grade level) is consumable and offers practice with math facts, mental math and problem solving.
Category Description for Saxon Math:

Now available from the publishers of Saxon is the Math Intermediate Series (their public school line). This textbook-based program offers an alternative for parents who want to stick to Saxon, but want a colorful, hardcover text written to the student, rather than an overwhelming scripted teachers manual there are no teachers manuals in this series.

Intermediate 3 can be used in lieu of the traditional Saxon Math 3 and covers the same topics addition/subtraction facts, fractions, probability, estimating/calculating area, multiplication and division facts, dividing two-digit numbers, multiplying three numbers, arrays, congruent shapes, capacity, polygons, classifying angles, adding/subtracting multi-digit numbers, estimating lengths and distances, etc. There are 110 lessons and 11 "Investigations" which explore math concepts in-depth. Manipulatives are mentioned (but optional), and assessments are written only as opposed to both oral and written in the traditional Saxon Math 3.

Intermediate 4 and 5 can be used instead of Saxon 5/4 and 6/5. These include 120 lessons each, along with 12 "Investigations" in each. Early Finisher Problems found in the Intermediate edition offer enrichment and real-world application. Intermediate 4 includes word problems, elapsed time, inverse operations, multiplying two and three-digit numbers, mixed number and improper fractions, fractions/decimals/percents, geometry and measurement, division with two and three-digit numbers, estimating perimeter/area/volume, probability, etc. Intermediate 5 includes word problems, add/subtract/multiply/divide whole numbers/decimals/fractions/mixed numbers, equivalent fractions, convert between fractions/decimals/percents, estimation, variables/expressions/equations, geometry and measurement, probability, etc. Manipulatives are referenced throughout these levels (unlike 5/4 and 6/5), but they are optional. The same methodology is employed in both the Intermediate and traditional Saxon Homeschool math courses, but Intermediate goes more into detail with the 4-step problem-solving process: 1) understand the problem, 2) devise a plan, 3) carry out the plan, and 4) look back (evaluate).

Homeschool Kits include student text, test book and test answers, solutions manual, and "Power Up" workbook. The "Power up" Workbook (similar to Meeting Book at third grade level) is consumable and offers practice with math facts, mental math, and problem solving. Please note that no answer key for the Power Up Workbook is included. There are also Activity Pages referenced in each student text which are available only as PDF downloads (see our site listings for the Homeschool Kits to download).

Additional materials are available separately Written Practice Workbook, Adaptations Student Workbook, and Student Reference Chart. Adaptations Workbook is now available for each level, which provides an alternative for students with special needs. This consumable workbook contains adapted versions of the practice problems found in the student text, with plenty of space provided for working the problems in the workbook. The adapted problems offer more visual prompts and clues for doing the problems. Written Practice Workbook includes consumable worksheets of the Written Practice Problems found in the text. Student Reference Chart* is intended for easy access to formulas, helpful hints, and other reference tools.

This is a great opportunity for those who love the Saxon Math approach; you can now choose your program at these levels.

Primary Subject
Mathematics
Grade
4
ISBN
9781600325137
Format
Paperback Book
Brand Name
Saxon Publishers
Weight
0.6 (lbs.)
Dimensions
11.0" x 8.5" x 0.25"
Powered by TurnTo
Questions that need answers | My Posts
Start typing your question and we'll check if it was already asked and answered. Learn More
Do not include HTML, links, references to other stores, pricing or contact info.
My question is about: