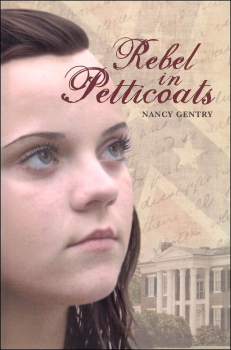 Living in the South at the outbreak of the Civil War, 10-year-old Rachel Franklin and her family are among the first to cheer and applaud the resistance against the Northern states. Friends and family are eager to join the cause and fight in the name of the proud South. But soon, the war begins to take its toll. The true meaning of a "total war" becomes apparent. Rachel must take on increased responsibilities, help the wounded, and pray that her family participating in the war is okay. When disaster threatens, Rachel must deliver a letter to her father to save countless men. Written in a decidedly even-handed tone, this book accurately conveys the seemingly foreign world of the old South"family plantations, slavery, religion, and bigotry. Though fiction, this story of Rachel and her family may as well be a historical piece of this complicated time period. 265 pgs, sc.

In 1861 ten-year-old Rachel Franklin and her family are pulled into the midst of the Civil War. Though at first the glory of fighting for the southern Cause brought pride and excitement into the Franklin home, the truth of war's hardships soon become apparent. Before the war, the biggest worries for Rachel were using proper manners and controlling her jealousy towards her brother Bud's sweetheart, Suzanna Wade. Now Rachel and her mother must work the gardens, pick cotton, tend to their wounded men, and wait between letters with only hope that their loved ones survive. "We must be strong," Mama tells her, and on the night when Rachel must deliver an important message for Papa to save the lives of countless men, she learns the true meaning of bravery when she becomes a little Rebel in Petticoats.