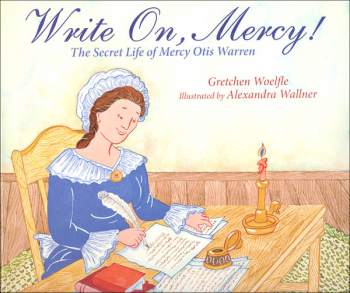 Daughter, sister, wife, mother. These roles defined the life of Mercy Otis Warren in Boston in the 1770s. But she had a secret life. She was a writer. Uncharacteristically well-educated for women of her day and believing in the pursuit of freedom that was all around her, she wrote. Poems and plays, all with a patriotic message and all without her name attached. But there were a few who knew including her husband (James Warren) and his good friends (John and Abigail Adams). Her most ambitious undertaking, a history of the American Revolution, was started during the war and was completed over thirty years. Its three volumes told not only the story of the quest for freedom from British tyranny but included "biographical, political, and moral observations." This beautifully illustrated children's book captures Mercy's story along with a glimpse of the nation being born around her. 10.25"x 10.25", 36 pgs, hc (with dust cover). ~ Janice

Growing up on Cape Cod, Massachusetts, Mercy Otis Warren was fortunate to go to school with her brother. When she married Patriot James Warren, Mercy wrote in secretpoetry, plays, and about the events of her time. She wrote of the people she knew, including George Washington and John and Abigail Adams. It wasnt until Mercy was older that her literary life became known, with the publication of her three-volume history of the American Revolution. This is the first picture-book biography of an intrepid woman chronicler.