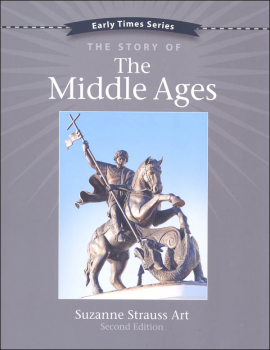 Written for middle school students, Suzanne Strauss Art's Early Times Series history books bring an easy-to-read style to the oftentimes difficult task of engaging students in the study of history. And now, full color maps and images throughout immerse students in a fully imaginable, long ago world of knights in armor, of kings, poets, and peasants. From barbarian invasions and the battles of Charlemagne's army to detailed descriptions_1 of the everyday lives of monks and lords, The Story of the Middle Ages incorporates a comprehensive study of medieval society with a detailed look at what it was really like to be there.

This comprehensive and highly readable volume traces the rising power and influence of the Christian Church, the development of nation states, the growth of towns, the creation of a middle class, the expanding role of women, the rise of universities, and great achievements in the domains of science, art, architecture, and letters.

Beginning with the chaos that arose following the fall of the Roman Empire, The Story of the Middle Ages describes how various tribal societies the Franks, the Saxons, the Norsemen, the Arabs restored order in many parts of the Mediterranean world. The lively narrative is highlighted by colorful portraits of Clovis, Charlemagne, Alfred the Great, and other great warriors. But it was the Christian Church that maintained a form of the old Roman bureaucracy and stood as the guardian of law and order in most of southwestern Europe and Britain.

This book explains the founding and teachings of the Church and describes the important role of monasteries in extending the power of faith as well as preserving scholarship and art. Important religious figures such as St. Augustine, St. Benedict, and St. Francis are portrayed, while the description of a day in the life of a monk further enriches the narrative. The book explores the phenomenon of the Crusades from both the Christian and Muslim point of view and analyses the motives behind it. It examines the evolving political clout of the Pope and his interaction with the kings and emperors of the later medieval period.

While the Church controlled the thoughts and fears of medieval society, it was the feudal system that made the economy and local government work. A thoughtful analysis of feudalism is enlivened in this volume by a series of colorful vignettes a day in the life of a lord and lady, a knight, a merchant, and a peasant. The student learns the intricacies of training for knighthood, hunting with a falcon, weaving cloth, defending a castle, traveling by mule, grinding wheat, coping with obligations to a myriad of people, and many other aspects of daily existence in medieval times.

Each chapter in The Story of the Middle Ages concludes with review questions, ideas for further discussion, and suggestions for projects. The text ends with a detailed analysis of European society at the end of the Hundred Years War which provides a useful link to the next volume, The Story of the Renaissance.