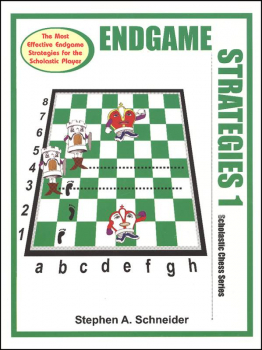 Serious about your chess game? So is chess coach Stephen Schneider, who has been coaching and teaching kids how to play chess since 1974. After introducing children to chess for many years, he has developed a complete educational system that takes children from the basics to using specific strategies. With three books and three corresponding DVDs, he familiarizes young players with the basic rules, opening strategies, and endgame strategies. Each book is set up in workbook format, with instructional text and workbook activities that test the player's knowledge and thinking.

Chess Basics is the first book, and begins by introducing the chessboard, set-up, and then the pieces. Each type of piece is covered individually, with pawns introduced first. After explaining how each piece can move, activities give children illustrated chessboard diagrams with pieces on them, and ask them to answer questions about the moves of specific pieces or to find all the moves for given pieces. Answers are always supplied for these activities, so players can check and see if they're on the right track, or if they found all the possible moves. After the child has become familiar with the piece's movement, they are given game setups to practice with. In Chess Basics, players start with pawn-only games, and as subsequent pieces are covered, they play "pawn and ______" games, using only the just-learned piece and pawns. For games, a small chessboard is illustrated, with several pieces on it. Ideally, children should duplicate these setups on a chessboard, and play with an opponent to practice their strategy for each piece. After they've mastered the basics, players are introduced to special moves, such as "pawn promotion," "castling," and "en passant." Chess Basics ends with a glossary, recommended resources, and a study guide for the given games, so if a player lost every time, they can read through some suggested moves and improve their game!

The Pawn Games guide and CD-ROM takes the pawn games practice from Chess Basics up to another level. The guide takes players through strategies with just pawns as well as and pawns and one other piece. When they have read through the guide, they can pop in the CD-ROM and practice using the software (Win/Mac compatible). Chess players who already know the basics of the game can jump in here and use Pawn Games to enhance their strategy. The contents of the guide is also included in the newest edition of Chess Basics, so if you've already purchased that volume, you may wish to just purchase the Pawn Games CD-ROM individually. The CD-ROM features the artwork from the books and is easy to navigate, with no annoying music or animations.

After players have become acquainted to basic chess concepts, they can start to work on their strategy with Chess Openings and Endgame Strategies. Chess Openings introduces players to the many ways they can begin a game. There are many ways to start, and some offer strategic advantages over others. Chapters include: opening theory, chess notation, "The Queen's Raid," "En Passant," "The Two Knights Defense," "The Fork Trick," "Fried Liver Attack," "Power of the Pin," "The Stonewall," and "Taking Advantage in the Opening." Like the first book, this one offers students instruction in each concept, then offers them puzzles to determine the best move for a piece. Coverage of the basics is included at the end of the book, but ideally, players should be comfortable with them before beginning this book. The corresponding CD-ROM will help chess students practice beginning openings from the book, particularly "The Queen's Raid," "Two Knights Defense," "Fork Trick" and "Légall's Mate." Demo Mode shows students the moves, while Play Mode allows them to practice and compete against the computer. Endgame Strategies focuses on strengthening your abilities to close the game and win. In four parts, it covers basic checkmates and back rank mate, basic king and pawn endgames, and endgames with other pieces. Like the other books, after introducing the concepts, kids are given puzzles and chess situations to examine and figure out the best moves. Chess Tactics offers chess-lovers the opportunity to enhance their middle game by solving chess puzzles - over 300 of them! The puzzles will help players learn tactics like using pins, forks and skewers, as well as free piece captures. Organized from easy to challenging, this would be a great book for chess and puzzle-lovers as well as extra practice for students continuing to build their chess skills. Chess Tactics is recommended for anyone who plays, or for students who have completed Chess Basics, Chess Openings and Endgame Strategies. The DVDs that correlate with each book feature short segments with the author, in which he shows players examples of moves and strategy on a demo chessboard. The DVDs correlate with the books and offer players a chance to "see" the moves in action and maybe pick up a bit of Coach Schneider's chess wisdom. For children too young for the rest of the series, there's a Color My Chess World coloring book, which features simple activities, songs (on included CD), stickers and coloring pages that introduce the youngest children to chess pieces, basic chess moves, and the chessboard. The amount of thought and structure that has gone into this program is terrific, and its incremental approach is perfect for anyone who wants to learn chess from the ground up and is serious about developing their strategic skills. - Jess