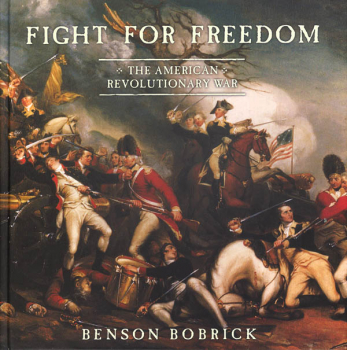 Students of the American struggle for liberty and independence will profit from this concise and colorful overview of the Revolutionary War era. The author skillfully provides important background information on the major battles and leading personalities from this historical period. In addition, the text includes personal anecdotes from soldiers and civilians, helpful maps, political cartoons, a useful timeline, as well as a wonderful collection of beautiful photos and illustrations. This volume provides readers with a greater appreciation for the struggles and triumphs of those who fought to make the American colonies a free and independent nation. 92 pgs, hc. Measures 10"x 10". ~ Mike

Renowned historian Benson Bobrick has written a moving chronicle of the American Revolution for young readers. From the first stirrings of unrest under British rule at the Boston Tea Party, to the treachery of Benedict Arnold at West Point, to George Washington's Christmas Eve surprise attack at the Battle of Trenton, to the British surrender at the Battle of Yorktown, Fight for Freedom explores the war that created one independent nation out of thirteen diverse colonies.

Fight for Freedom contains personal anecdotes from soldiers and civilians, as well as profiles of the many historical luminaries who were involved in America's fight for independence, such as George Washington, King George III, Abigail Adams, Benjamin Franklin, John Paul Jones, Thomas Jefferson, and Lord Cornwallis. Bobrick also explores the origins of colonialism in the New World, the roles women and Native Americans played during the American Revolution, the intricacies of building a new government, and the fate of those who remained loyal to the British crown after the onset of war.

Bobrick's dynamic narrative is highlighted with many period oil paintings, political cartoons, and key campaign and battlefield maps, making Fight for Freedom the ultimate book on the American Revolution for kids.